Update: this item has been moved to the Cancelled section of the Office 365 road map. Looks like it won’t go ahead after all.

To help managers collaborate more effectively with their employees, we will automatically create Office 365 Groups containing the manager’s direct reports. Managers can easily update, delete, or modify the group at any time.

Looking through the RSS feed from Office 365 roadmap watch, it looks like this feature first appeared on the public roadmap on the same day it was announced in Message Center.

The announcement has been met with confusion and a mostly negative response in discussion threads on the Microsoft Tech Community and Reddit. I’m writing this article for two reasons:

Update: Microsoft has responded to customer feedback and is slowing this roll out, starting with select customers to validate the impact and benefits of the change.

What Will Automatic Group Creation Do?

The roll out of automatic Group creation for Office 365 tenants will result in an auto-created Office 365 Group (that’s big G) for anyone who has between 2 and 20 direct reports.

An Office 365 Group includes a mailbox that acts in a similar manner to a shared mailbox and distribution group combined (members can subscribe to emails sent to the Group, and the mailbox preserves a history of all messages). The Group also has a shared file storage area hosted in SharePoint Online, shared OneNote notebook, and can act as the underlying membership service for Planner and Teams.

The Group will be named “Manager Name’s Direct Reports”, and have an email address of “Manager Alias-dr@yourdomain.com”. The direct reports will be added as members. The manager will be granted ownership of the Group so that they can perform ongoing management of the Group membership.

The benefit to the team is that they can begin to leverage the features of Office 365 Groups for collaboration. As a simple replacement for a traditional Exchange distribution group, the Office 365 Group has the benefit of keeping a history of all communications sent to the Group. However, Groups do not behave the same as Exchange distribution groups, because the sender does not receive a copy of their own message. For some people that is not the desired behavior. 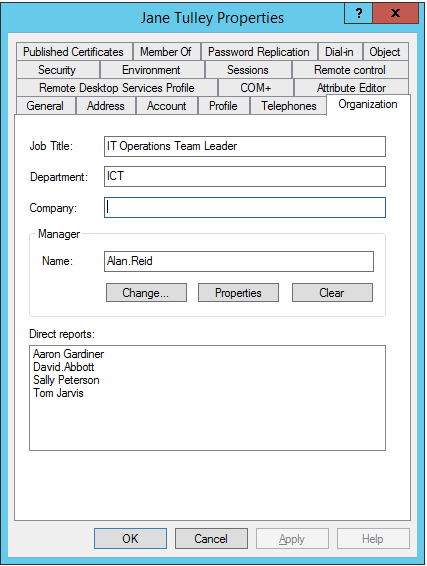 So in the above example, a Group named “Jane Tulley’s direct reports” with an email address of “jane.tulley-dr@exchangeserverpro.net” will be created. Jane Tulley will be the Group owner/manager, and the four direct reports will be added as members.

When the Group is created, the Group manager and their direct reports will be emailed automatically to let them know that the new Group is ready for them.

Will Groups be Automatically Created in Tenants That Have Disabled Groups?

No. If your Office 365 tenant has disabled the Groups feature entirely, then no Groups will be automatically created.

How Can We Prepare for Automatic Group Creation?

If you want the Groups to be automatically created, then you should review your manager/reports relationships in Active Directory to make sure they are populated and accurate before the April roll out of this feature.

If you do not want automatically created Groups, or you want to delay the feature from creating any Groups while you clean up your manager/reports relationships, then you can disable automatic Group creation by connecting to Exchange Online using PowerShell, and then running the following command.

You can revert that setting to $true later when you’re ready for auto-creation of Groups.

We Already Use Groups for Each of Our Teams, Will New Groups Be Created?

Microsoft says that their algorithm will check whether an Office 365 Group containing the same manager and direct reports already exists. In the example above, if Jane Tulley already has a Group for her team, then a new Group will not be created.

However, if Jane Tulley already has a Group with her direct reports as members, but it also has additional members that fall outside of the manager/reports relationship, then a new Group will be created for “Jane Tulley’s Direct Reports”.

Where this creates duplication, the unneeded Groups can be deleted.

How Can We Remove Automatically Created Groups?

Group owners can delete Groups that they do not want. Microsoft says that if an auto-created Group is deleted, another Group will not be created automatically for that manager in future.

If you want to remove all of the auto-created Groups from your Office 365 tenant, you can identify them all by a special property called “Groupsona:AutoDirectReports”. To find all of the automatically created Groups, connect to Exchange Online using Powershell, and then run the following command.

Is the Group Membership Automatically Updated?

What Happens if a Manager or Group Member Changes Teams?

This is where things get a bit messy, so I’ll do my best to accurately communicate what has been shared by Microsoft so far.

If a Group member changes teams (e.g. no longer works for Jane Tulley, and reports to someone else instead), it is up to Jane and the new manager to adjust their Group memberships accordingly.

If a manager changes roles, the ownership of the Group will not be automatically updated. One of two approaches can be used from here:

If a team is completely disbanded, as often happens, the Group should be decommissioned. There is no archive process for Groups at this time, but you can use Tony Redmond’s guidance here for removing obsolete Groups.

Any content migration between Groups will require manual effort. Some workloads such as Planner and Teams do not have a method to copy or move content though.

Where Can I Learn More?

Microsoft is updating documentation for this feature as more questions and scenarios are put to them by admins and customers.