You are here: Home / Collaboration / StaffHub / A Look at Using Microsoft StaffHub for Managing Team Rosters in Office 365

Microsoft has released StaffHub, an Office 365 application that is designed for managing rosters for staff workers. StaffHub is positioned as a solution for “deskless workers”, and uses examples such as baristas, hair stylists, waiters, and bus drivers. Launching with a functional web application and mobile apps for iOS and Android (but not Windows Phone/Mobile), StaffHub allows managers to create rosters, assign shifts, and share files. Managers and team members can also communicate with each other using StaffHub, such as when staff need to swap shifts.

The idea of deskless workers fits many business scenarios, but personally I can also see a use for StaffHub for managing rosters for other types of workers as well. From my own experience in IT, I can see that StaffHub would also be useful for managing scenarios such as a on-call roster for IT ops teams, which is the scenario that I’ll use here in this article.

Microsoft has enabled StaffHub by default for eligible Office 365 tenants. If you need to check the status of StaffHub for your tenant, or re-enable it, you can do so by logging in to the StaffHub admin portal with an administrative account.

You can also find the StaffHub admin portal via the Services & Addins section of the Office 365 admin portal, but it ultimately leads you to the dedicated StaffHub portal.

The StaffHub admin portal also has other configuration options for automatic provisioning (or self provisioning) of user accounts, for when managers add a team member that does not already have an Office 365 account in the tenant. 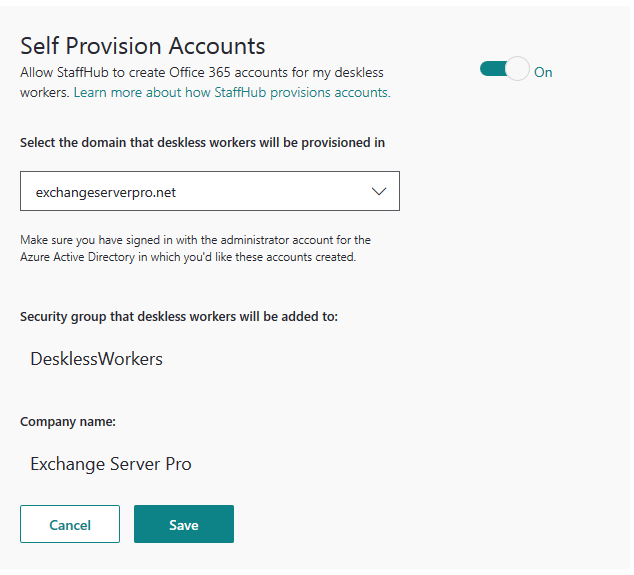 StaffHub leverages Office 365 Groups, and you can also specify a prefix for the name of Groups that are created by StaffHub, which is helpful for being able to identify those Groups later for reporting purposes.

Creating a StaffHub Team and Roster

Managers can log in to the StaffHub app to create a roster for their team. In fact, anyone with an account in your Office 365 tenant can login and create a roster in StaffHub. For this example, the team leader of IT Operations will create an on-call roster for her team. 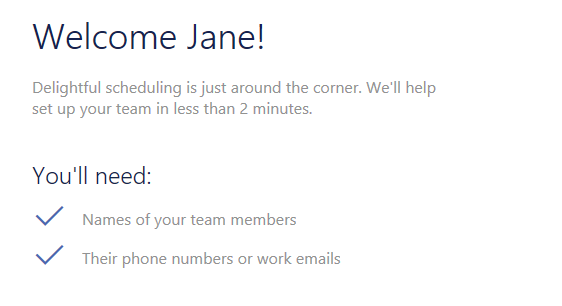 During the team setup wizard you can send your phone a text message with a link to download the mobile app, but you can also skip this step. The apps are easy to find in the iTunes Store and Google Play Store.

Team members can be invited via email or text message. When you type part of a name here you can pick from the Global Address List. Be aware that after clicking the Add button the team members is immediately sent the invitation, even before the manager clicks the Finish Setup button. So while you can remove a team member that has been accidentally added at this stage, that person will still have received an invitation. In my testing there was no message sent to notify a user that they have been removed from the team. I think this behavior should be changed in StaffHub so that managers have an opportunity to get their team fully populated and configured with a roster before the initial invitations are sent out to team members. 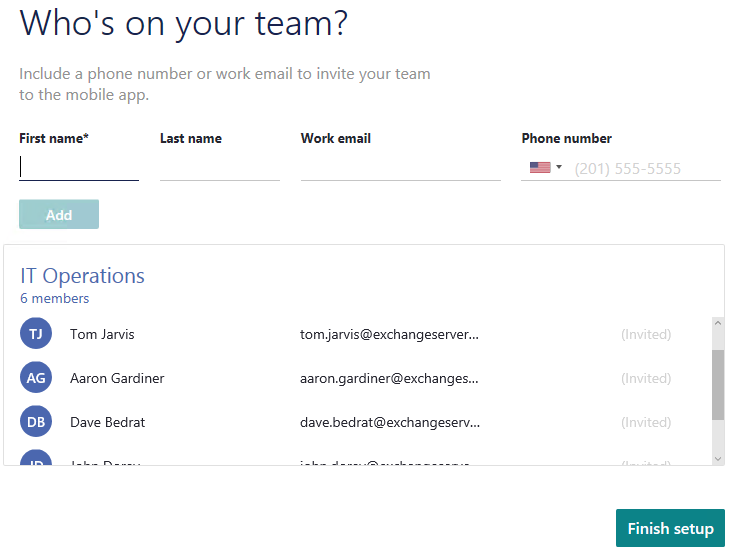 The user’s access to the associated Office 365 Group is also not removed. Only the manager is added as the owner of the Group. Team members are added as Group members after they first login to StaffHub after being added to a team by a manager.

The invite email that users receive also needs to be opened from a mobile device, not from their normal web browser. A desktop browser simply presents a message telling the user to open the link from their mobile device instead. However, the user can login via the main StaffHub landing page to access their group. This end user experience could use some improvement. 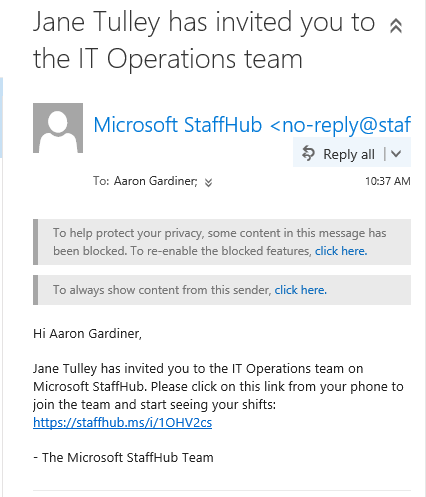 Back to the manager’s view of things, after the team has been created the manager can begin creating schedules and assigning shifts. 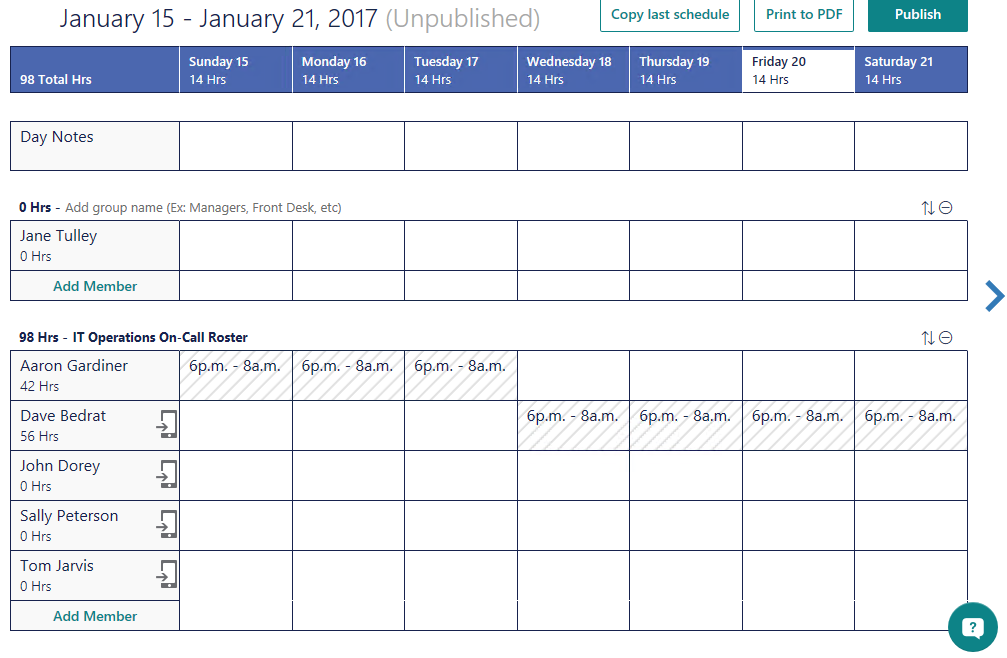 After creating the schedule for a roster period, the manager publishes the roster and staff are notified (via mobile app, and probably via text message although I didn’t have any mobile phone numbers configured) and the schedule becomes visible.

Although the web interface is functional for managers, team members can do little more than view their roster. Interaction between team members to send messages or swap shifts is available in the mobile apps. 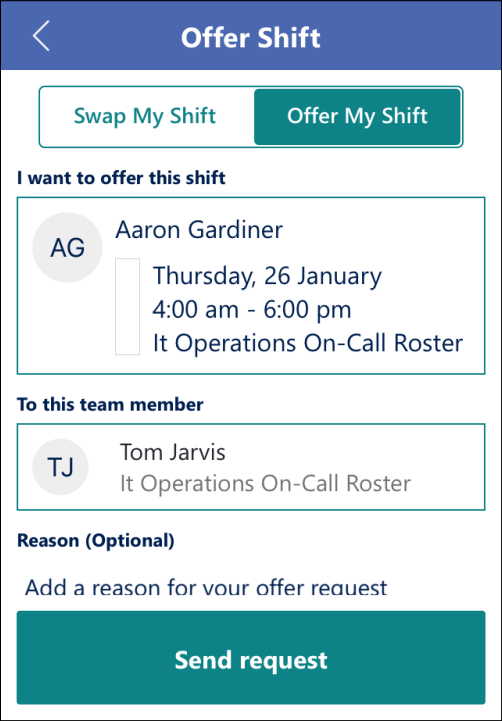 I found the apps to be quite simple to user, and they updated quickly with changes and notifications. The built-in messaging system is a handy feature for teams where not everyone has the contact details for others.

As a first release, StaffHub is reasonably good. A roster can be created quickly, with simple copy/paste functionality to make it easy to duplicate shifts to multiple time slots and team members. Managers can create multiple teams, and multiple groups (rosters) within teams, and staff can be members of multiple teams and switch easily between them in the mobile apps.

However, there’s a few things I immediately found that I would like to see fixed in the near future.