Office 365 allows organizations to delegate administrative privileges in a granular fashion. There is an over-arching “Global Administrator” role, as well as a series of lower privilege roles for specific administrative tasks. A partial list of the admin roles is visible in the user management area of the Office 365 admin portal. 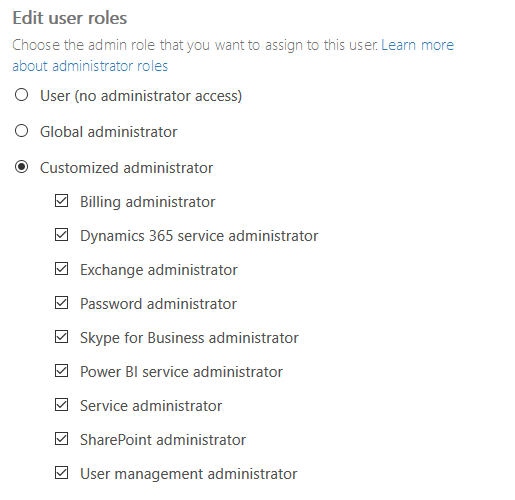 That’s not the complete list though. There’s several other administrative and non-administrative roles in Office 365. While looking for a complete list, I happen to stumble across some differences between how the old MSOnline PowerShell module reports the list of roles, compared to the new AzureAD PowerShell module. Get-MsolRole returns 30 groups, while Get-AzureADDirectoryRoleTemplate returns 34 groups. I’ve highlighted the differences in the table below. 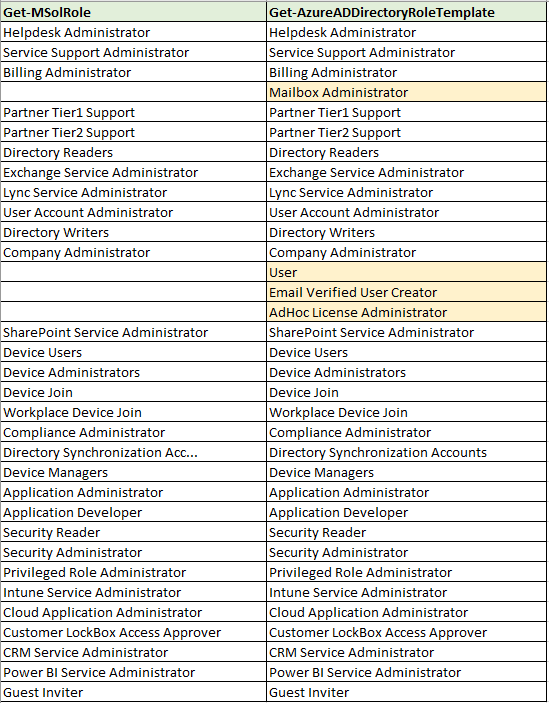 It’s good practice to review the membership of admin groups on a regular basis, to make sure that only those users who require admin privileges in your tenant actually have them, and nobody else has sneaked in there and been forgotten. It’s even better practice to manage privileged access using Azure Privileged Identity Management.

If you’re familiar with the Exchange RBAC permissions model you will notice that none of the Exchange RBAC roles are included in that list above. If you want to report on those you can use my RBAC role group membership report script.

If you just want to download the reporting script, go to the end of this blog post.

To begin with, let’s look at the output of Get-AzureADDirectoryRole for one of my tenants.

To see the membership of a role, such as Company Administrator (which is the same as Global Administrator when you’re editing a user’s roles in the Office 365 admin portal), we need to run Get-AzureADDirectoryRoleMember and supply the ObjectId.

The standard output looks different depending on the role that you’re querying. For example, Directory Readers looks like this.

For this script I’m going to report on:

Retrieving that information for the members of an admin group/role is not difficult, as you can see above. To generate a full report it’s really just a matter of looping through the roles, collect the desired info, and present it in a readable format for the report. I’ve chosen to used CSV as the file format. You can then load the CSV into Excel to filter and sort the data as required.

This script, Get-O365AdminGroupsReport.ps1, relies on the AzureAD PowerShell module. If you do not have the module installed the script will throw an error. You can install the AzureAD module from the PowerShell Gallery.

To use the script, simply run the following command and you’ll be prompted to authenticate to Azure AD.

To see script progress, use the -Verbose switch.

The script will output a CSV file named Office365AdminGroupMembers-ddMMyyyy.csv, where “ddMMyyyy” is the current date (e.g. 17042017). If the file already exists, a unique string of characters is added to the filename.

There are two optional parameters that you can use to change the output behavior:

You can download Get-O365AdminGroupsReport.ps1 from the TechNet Script Gallery.