I’ve previously written about how to use Azure AD conditional access to enforce multi-factor authentication for unmanaged devices when connecting to Office 365 services.

Some recent commenters reported that the policy demonstrated in the tutorial wasn’t working for them. I spent some time in my test tenant trying to reproduce the problem, and found that mine had also stopped working.

To achieve that outcome, the conditional access policy was configured to grant access if the user passed MFA, OR the device is hybrid Azure AD joined, OR the device is marked compliant. The “OR” condition is defined by the “Require one of the selected controls” option.

As I explain in the article, this is a different approach than simply requiring MFA for external users, and bypassing MFA for internal/trusted IP ranges. The rationale is that network locations are a poor signal of trust, whereas a managed device can be considered more trustworthy on the basis that you can require it to meet your device compliance policies, have up to date security software installed, and so on.

As a side note to this, a recent addition to Intune is the ability to integrate with Windows Defender ATP and take into account the device security state (e.g. whether suspicious behaviour has been detected on the device) when determining device compliance.

Anyway, the problem reported by the commenters also started to impact me personally in my production tenant, with my iPhone prompting for MFA in Outlook any time I’m outside the office. Super annoying, and not what I want for my user experience.

Looking further into the issue, I stumbled across a new conditional access policy condition for “Device state”. This feature is currently in preview. 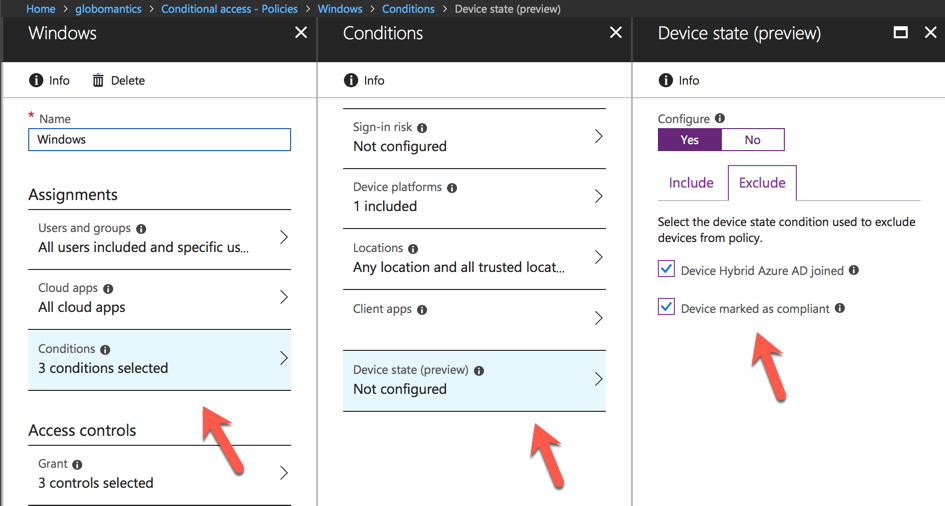 Per the official docs:

The device state condition allows Hybrid Azure AD joined and devices marked as compliant to be excluded from a conditional access policy. This is useful when a policy should only apply to unmanaged device to provide additional session security. For example, only enforce the Microsoft Cloud App Security session control when a device is unmanaged.

According to this commit, the documentation was updated on April 27th, which is a few days before people started leaving comments on my previous blog post saying that the tutorial no longer works as intended. A few weeks prior to that I was able to run through that exact scenario for a demo in my Office 365 security course and it was working fine.

I haven’t seen any announcements about the new control rolling out, but I’m still looking for those. Either way, after updating my conditional access policy to use the new preview control to exclude my trusted devices from MFA, everything is working again as intended in both my test tenant and my production tenant.

Update: I’ve since rolled back to my original policy configuration, and it’s now working as before. I’m not sure why it was failing for a few days there, possibly some other issue that happened to impact both tenants (and the other commenters who were having problems). I will keep an eye on things and update this post again if I see more issues.