You are here: Home / Blog / Microsoft Is Changing How They Publish Office 365 IP Addresses and Urls for Firewall and Proxy Access

In a recent announcement in Message Center, Microsoft is letting customers know about upcoming changes to how Office 365 IP address and URL details are published. These details are used by customers who require specific firewall or proxy rules to allow their users and devices to access Office 365 applications and related services.

Previously, and until October 2018, Microsoft has maintained a support document listing the URLs, IP address ranges, and ports that are required or optional for Office 365 connectivity. Customers who do not limit outbound client connectivity have little need for this information. It is primarily used by those organizations who restrict outbound connectivity, and who want to configure the appropriate firewall and proxy rules to permit Office 365 applications to work.

Aside from the useful and human-readable support document, the data has also been available as an XML file and sample proxy PAC files. An RSS feed has also been used to publish changes. All of those sources are planned to be retired.

The replacement that Microsoft has developed is a REST web service. The web service can be polled for:

The REST web service returns data in either CSV or JSON format. The CSV file is the most human readable, but is not as friendly as the current support document.

The JSON data is, naturally, quite unreadable. But that isn’t the purpose of the JSON feed. It’s intended for consumption by automation processes, or by firewall and network management tools that can ingest the data and automatically configure the appropriate rules. Many vendors have this capability for the existing XML file, and can automated updates using the RSS feed as well. So it’s expected that those vendors will simply adjust to the new JSON format.

You can of course write your own PowerShell scripts, or use another coding language, to make use of the JSON data. PowerShell cmdlets such as Invoke-WebRequest, Invoke-RestMethod, and ConvertFrom-Json are useful for that purpose. 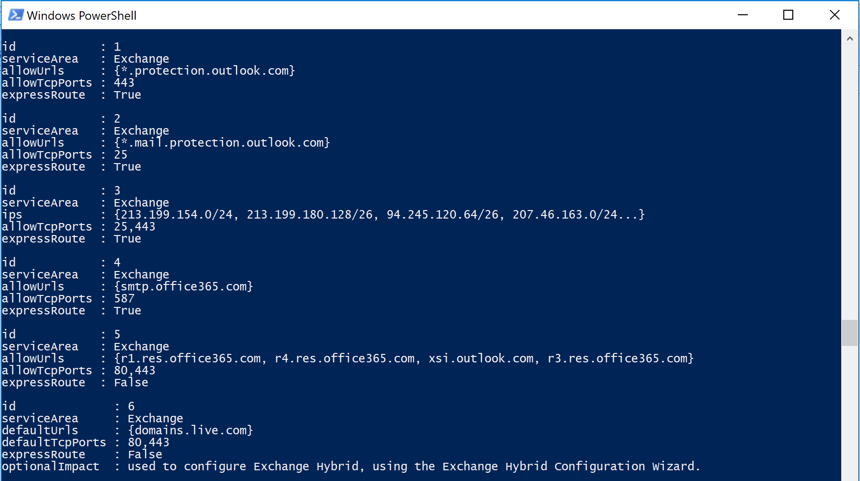 Microsoft provides a sample script in PowerShell and Python on this page (scroll down near the bottom) which you can use as a starter. The sample script polls for changes since the last time you ran the script, saving results in a temp file to detect when changes have occurred.

Overall, this change makes sense from the perspective of automation. The REST web service should provide a better and more flexible experience for vendors and anybody who writes their own custom scripts to consume the data.

Unfortunately, we lose two good things in the process. The support document is the only human-readable source of this data that Microsoft provides. It’s the type of document that people can sit together and discuss as they go through it. Hopefully some PowerShell enthusiasts will develop a script to generate a user friendly document from the data, and share that with the community.

The other loss is the RSS feed. Whether the feed was used for automation, or merely as a notification, it is handy to have something provided by Microsoft to let us know when changes have occurred. RSS is also simple to consume in a feed reader, convert to an email notification, or send to a channel in Teams. Without the RSS feed, we need to create our own script or tool to poll the REST web service, detect changes, and send our preferred notification. Again, hopefully some PowerShell enthusiasts will solve this problem for the community.

You have until October 2018 to plan for this change. Keep an eye out for announcements when the REST web service becomes generally available. It’s currently in preview, and “shouldn’t be relied on in production”, according to Microsoft.

If you have feedback for Microsoft on this change, there’s a discussion thread here in the Microsoft Tech Community.