When the OneDrive for Business Next Generation Sync Client (which I’ll just refer to as OneDrive for Business) began rolling out, one of the missing features was the ability to synchronize content with SharePoint document libraries. This also meant that synchronizing with files in Office 365 Groups was not possible, which for me personally was an annoying feature gap because we use an Office 365 Group to collaborate on writing and updating Office 365 for IT Pros. Using the legacy OD4B client (also known as groove.exe) has been a long-running source of frustration, with every attempt to work on files in the library requiring a troubleshooting session for sync and auth problems.

At Ignite 2016 Microsoft has finally announced that SharePoint library sync has arrived (in Preview form) for OneDrive for Business. First Release customers will begin seeing it in the next few months, and remaining customers will be rolled out in early 2017 (which is later than originally promised, but at this point I’m just glad to see it finally happening). A list of other improvements is also included in the announcement, which you can read in full here.

To get access to the preview of the new features, follow the directions here. As you’ll see, they’re not steps that would be convenient to run through for every user in your environment, but for your own testing purposes and to see how the new features behave before they are rolled out to your clients you might want to try the preview on your own computer or with a few tech savvy users.

As a final act of annoyance my legacy OD4B client crashed when I removed the last synchronized folder. You won’t be missed, groove.exe.

At this point you should make a backup of the files left on your local disk. I just moved mine to a different folder out of the way.

The steps for synchronizing a library to your computer haven’t changed. After logging in to the Office 365 tenant that hosts our files I was able to navigate to the Group, select files and then click Sync.

The next gen client helpfully supports selective sync, so I’m then presented with the usual prompt to choose which folders to synchronize. 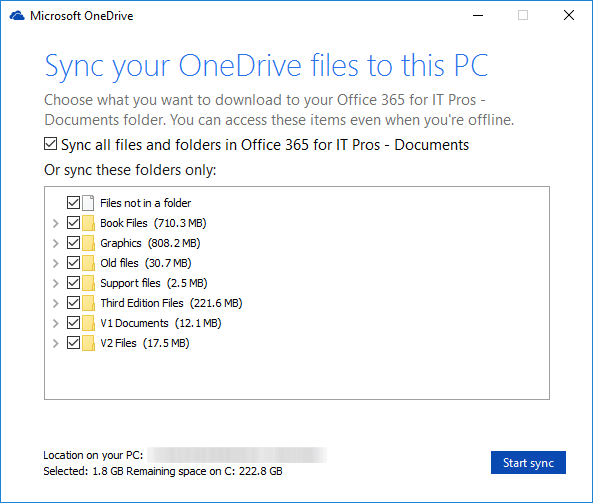 After that it is just a matter of waiting for the initial sync to complete. Since I’m in Australia and the tenant we collaborate in is in Europe, transfer speeds tend to be a little slow (especially compared to the performance I get with Dropbox). However, I’m just glad that this feature now exists, as the next gen client tends to be much more reliable and less prone to sync and auth errors than the groove.exe client has been over the years.