I was performing some mailbox server health checks recently and was trying to find an easy way to test mail flow latency between a lot of servers at once using Test-MailFlow.

After a little bit of tinkering I came up with a PowerShell script that would do the job, but the report it generated was a bit hard to read because all of the output was just on the screen in a single colour. So I decided to take it a step further and output the results to HTML and use colour-coded table cells to give me a report that is easier to read at a glance.

So I’m sharing the script with you here as well. Please be aware that I haven’t put a lot of coding effort into adding custom parameters, testing a wide variety of scenarios, or doing complex error handling. Also the script doesn’t troubleshoot for you, it only outputs a result that may indicate a problem for you.

How to Run the Script

The script has no parameters, you simply execute it from within PowerShell on a server or computer that has the Exchange 2010 management tools installed.

You may need to right-click the downloaded file, open the Properties and unblock it. You may also need to set your PowerShell execution policy to allow unsigned scripts to run.

A small amount of output is written in the shell window to let you know that the script is making progress. 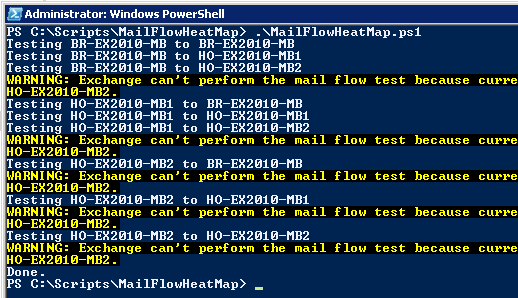 The result is a HTML file showing colour-coded table cells for the mailbox latency values (which are in seconds). 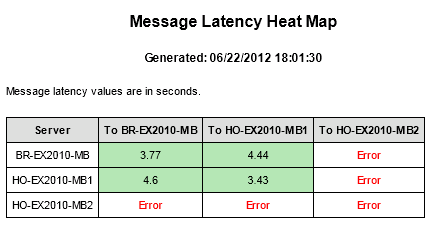 You can customize the heat map colours and the output file name by modifying these variables in the script itself (values are in seconds, cool and cold should be the same).

If you’re looking to scheduled the script to run using Task Scheduler there is an example of how to do that here.

If you’d like to email the report to yourself there is example code here. You would just need to modify that example to use the $htmlreport in this script as the message body.

I’ve closed comments on this post as it’s likely that this script simply won’t work well in most 2013/2016 environments these days. Keep in mind that this script was written in the Exchange 2007 era, when Test-Mailflow worked properly. The cmdlet tends to break in more situations now. But the script was always intended more as a proof of concept for building visual HTML reports from PowerShell scripts, and you’re welcome to take the code and use it or modify it for your own purposes.