Exchange Server 2016 has two management interfaces that you will be making use of in your day to day administration:

For administrators who are experienced with the Exchange Server 2007 and 2010 MMC-based management console, the change to a web-based interface may take a little getting used to. In fact, when the EAC first appeared in Exchange Server 2013 it was fairly widely criticised and had some obvious deficiencies. But over time it has been improved and works well today.

In the EAC you’ll find a simple navigation structure, with sections on the left side for the main categories of administration such as recipients and servers, and then multiple sub-sections for specific management, such as mailboxes, groups and resources in the recipients section. 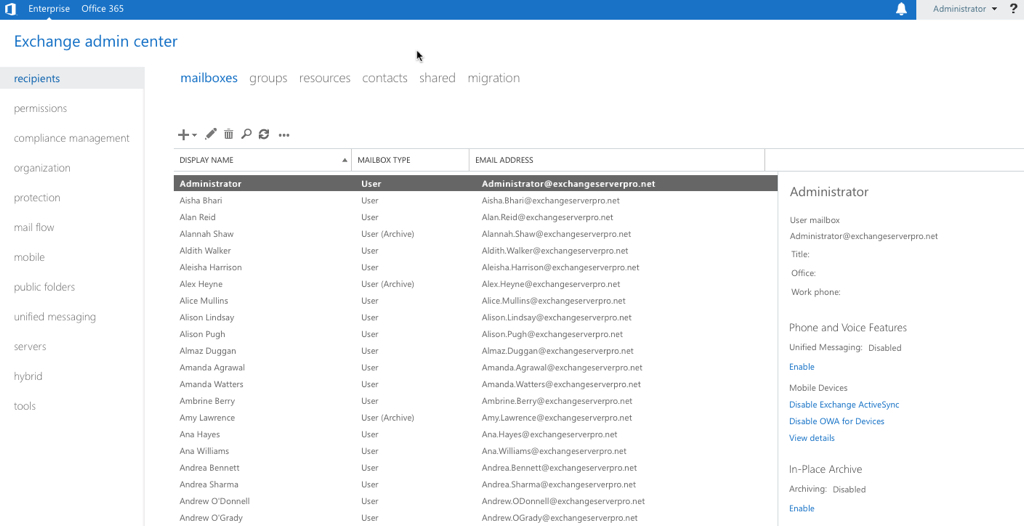 As a web-based console there is nothing that you need to install on your administrative workstations to be able to manage Exchange. You can simply connect to the Exchange Control Panel (ECP) URL for your Exchange server from any web browser. The ECP URL typically matches the OWA (or Outlook on the web, as it’s now known) URL configured on the server as well, and as with other HTTPS services such as OWA and ActiveSync it can be load balanced across multiple servers.

The Exchange Management Shell is the PowerShell management interface for Exchange Server 2016 and is where most experience admins prefer to spend their time. PowerShell tends to be faster than the EAC, and is more efficient for many administrative tasks such as making bulk changes or pulling report data.

The Exchange Management Shell is installed automatically on your Exchange 2016 servers, and available from the list of apps on the start screen.

If you do need to install the Exchange management tools on your workstation (which Microsoft recommends if you’ll be frequently administering Exchange from that computer, and which I often do when I’ll be running a lot of scripts as scheduled tasks) then you do so for the following operating systems:

You can then run Exchange 2016 setup from an elevated CMD prompt and specify a management tools install.