If you're planning an Exchange Server 2016 deployment you will need to consider which edition of the product to deploy on your servers.

For Exchange Server 2016 there are two editions of the server product itself, and there is only one difference between them which is the number of mounted databases per server.

Microsoft's definition of a “mounted database” is:

Here's a few examples. In this example a single Mailbox server running Standard Edition has 5 mailbox databases. All 5 databases will be able to mount, and an additional recovery database can also be created and mounted for any data restoration scenarios. 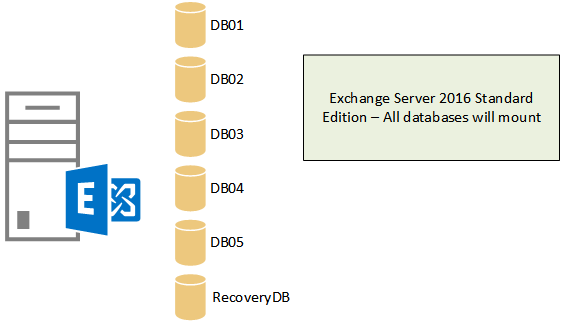 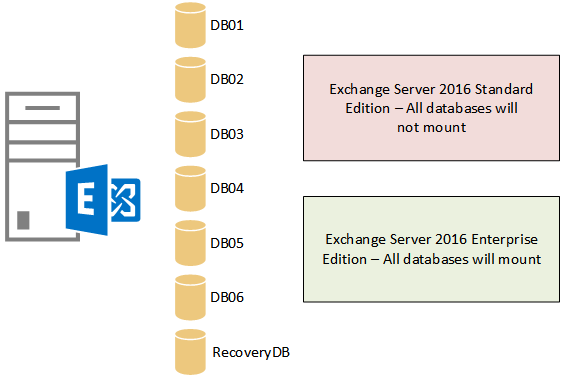 To be clear, there is no requirement to run Exchange Server 2016 Enterprise Edition just because you're deploying a DAG. The choice of server edition is purely driven by the number of mounted databases each server will be hosting.

For the Edge Transport role, given it does not host any databases, it makes sense to use a Standard Edition server license.

When you purchase your Exchange Server 2016 server licenses you'll be provided with a license key that needs to be entered on the server. The license keys determines which server edition is installed, there is no different in installation media or installation method for each edition. All servers are first installed as a Trial Edition, and then you add your license key after installation is complete. You can upgrade from Trial to Standard, or from Trial to Enterprise. You can also upgrade from Standard to Enterprise. However, you can't downgrade from Enterprise to Standard without completely reinstalling the server. This means it is feasible to initially license your servers as Standard Edition, and then later upgrade them to Enterprise Edition if your environment scales up (e.g. if there is a corporate acquisition or merger).

As a final note, the information above applies only to the server licenses. The Client Access Licenses (CALs) are considered separately, and have no impact on the server license you choose to deploy and vice versa.