At the beginning of an Office 365 project I like to discuss with the customer what they need for their long term identity model. I start with identity, even though some customers want to jump straight to how mailboxes and other data will be migrated, because the identity model is a big factor in determining the best migration method. The discussion usually comes down to one of two scenarios:

The article links to an older blog post that was written in the Exchange 2010 era, but still applies to later versions of Exchange.

For organizations intending on keeping DirSync in place and continuing to manage user accounts from the on-premises organization, we recommend not removing the last Exchange 2010 server from the on-premises organization. If the last Exchange server is removed, you cannot make changes to the mailbox object in Exchange Online because the source of authority is defined as on-premises. The source of authority refers to the location where Active Directory directory service objects, such as users and groups, are mastered (an original source that defines copies of an object) in a hybrid deployment. If you needed to edit most mailbox settings, you would have to be sure the Active Directory schema was extended on-premises and use unsupported tools such as Active Directory Service Interfaces Editor (ADSI Edit) for common administrative tasks.

To summarize the two quotes above, if you have directory synchronization in place, then you need to manage the mail attributes of users, groups, and contacts in the on-premises Active Directory, and then allow those changes to synchronize to Azure Active Directory. And the only supported way to manage the mail attributes on-premises is using the Exchange management tools, which requires at least one Exchange server to be running.

So where does that leave customers? Here's a few scenarios to consider:

What if you absolutely insist on removing Exchange but keeping directory synchronization running? For those scenarios you've probably found some third party tools, or someone who tells you that it works just fine and all you need to do is write some scripts or use ADSIEdit. Yes, from a technical perspective it's possible. But using anything other than Exchange to manage mail attributes in Active Directory is not supported by Microsoft, and I'm not in the habit of promoting unsupported solutions.

In all of the above I haven't gone into complex scenarios, nor have I mentioned AD FS. For customers with a lot of complexity or who have federation requirements I generally find that they have already learned and accepted the requirements for on-premises Exchange Server in certain scenarios. The advice above is mostly for the small to mid-size customer who feels the need to remove all on-premises Exchange servers to reduce their management overhead.

All is not lost though. Microsoft announced at Ignite 2016 that they were looking at ways to remove the on-premises server requirement. At Ignite 2017 they revealed some more information about their plans in this area. A hybrid connector that works in a similar fashion to Azure App Proxy and Azure AD Connect Pass-thru Authentication is being developed that will make administration of on-premises objects via the Office 365 admin tools possible. It will still require a component to be installed on-premises, but that is certainly preferable to maintaining an entire Exchange server. 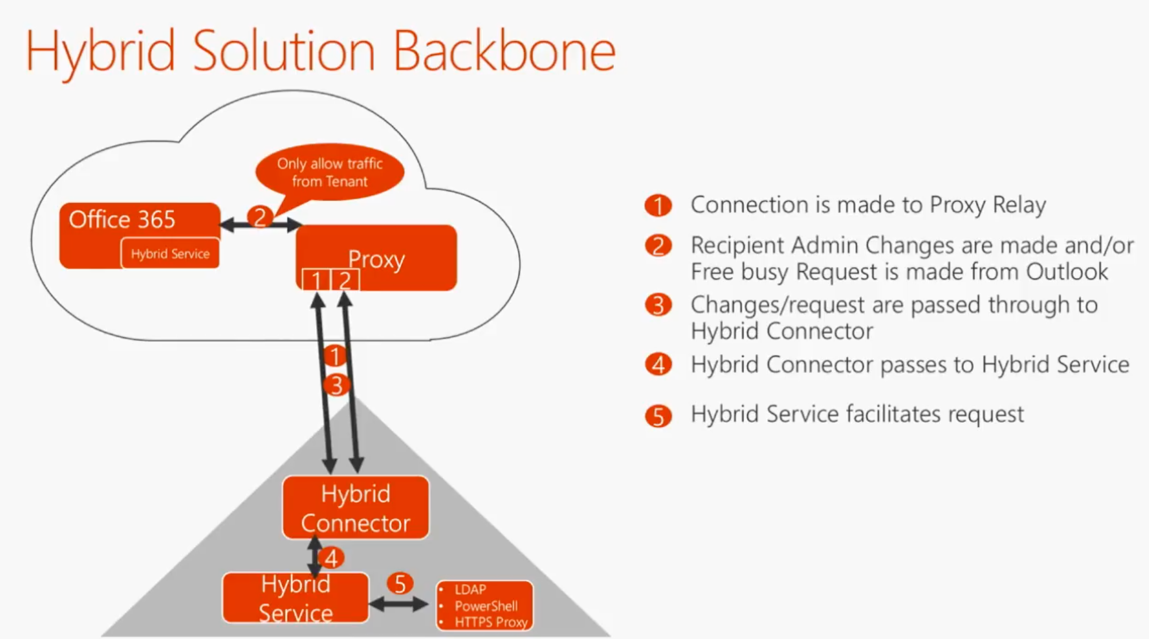 Only a high level overview of this process has been provided so far, and we may not see the tool for another year or more. Hopefully we'll receive more good news on this at Ignite 2018.

For further expert advice, download your free copy of Email Migration to Office 365.