As a solo operator a team-based collaboration tool like Microsoft Planner won’t always be a perfect fit. I’ve previously used Trello, which is often compared to Planner, and also Kanban Flow. And of course, I’ve worked in many different companies that use Microsoft Project to manage projects. Each platform has its own strengths and weaknesses. Trello has great integration with other services (at one stage I was using it with some IFTTT recipes), and also has handy templating. Kanban Flow also has a handy Pomodoro timer, which helps me stay focused (I switched to an iPhone timer while I’ve been using Planner). Most recently I switched all my personal task and project management over to Todoist, which doesn’t have the Pomodoro integration but I can use a separate app for that.

Rather than approach Planner as purely a solo productivity tool, I’ve been looking at how to use it for managing small projects and collaborative tasks. I’m writing up some articles about that, but in this post I wanted to focus on what I’ve found to be good about Planner, and what I think it needs to improve on.

The best thing about Planner is that it is included free with your Office 365 tenant, and integrated with Office 365 services you’re already using. Creating a new plan is quick and easy from the Planner portal. 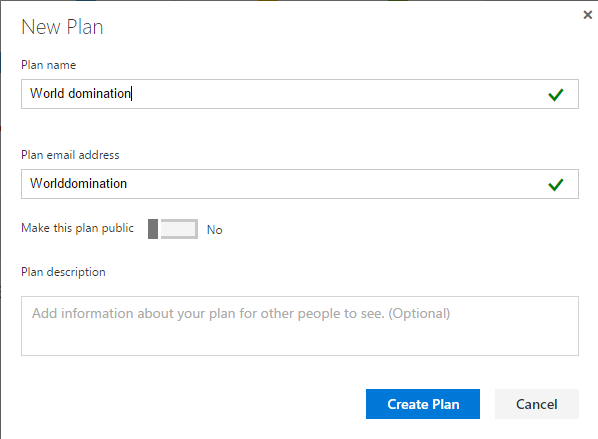 When you create a new plan, an Office 365 Group is created, along with all of the Group components such as the mailbox, calendar, document library for file storage, and OneNote notebook. This is also, in my view, somewhat of a downside as well. There is a 1:1 relationship between Groups and plans. When you create a Group, it has a plan. When you create a plan, a Group is created to host that plan. It’s conceivable that a Group would have members that need to work on more than one plan. A simple example of this would be a team of IT admins who want to coordinate regular, routine tasks such as monthly security updates. Creating a new plan every month will result in a sprawl of Groups, unless the previous months’ Groups are purged after they reach a certain age (life cycle management of Groups is entirely manual today). The other option is to re-use the same plan over and over, refreshing the tasks list each month, therefore losing visibility of previous months’ efforts. To me it seems logical that a Group should be able to have multiple plans.

Creating buckets and tasks within a plan is easy. I created a plan to manage the development of my latest Pluralsight course, and was able to map out each planned module as a bucket, and then add tasks for the production steps required for each module. 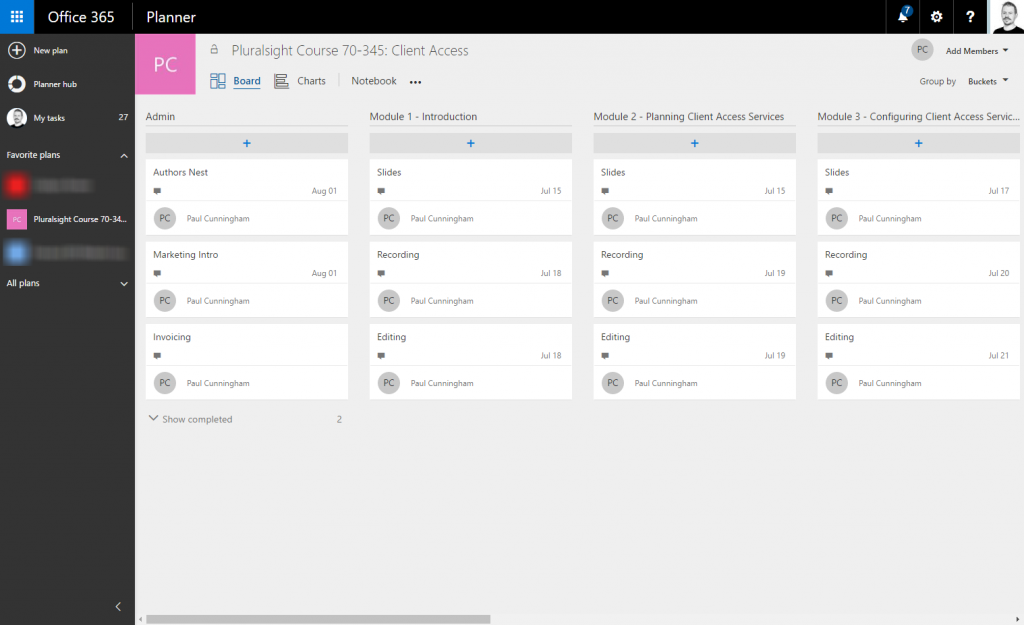 I have a large display, but the layout of Planner wastes quite a lot of space, so I can’t fit more than four buckets on screen at once. The scrolling is horizontal instead of vertical, so it doesn’t work with the scroll wheel on my mouse. You can rearrange buckets, but can’t stack them or compress them (one of Kanban Flow’s useful features is the ability to collapse a board/column once you’re done with it for the week, to free up space).

I added tasks to each bucket in the order they will be performed in. Unfortunately, new tasks get added to the top of the list, so all my buckets were then displaying tasks in the wrong order. Even after you’ve set target completion dates for tasks, there’s no sorting within a bucket, except by manually dragging them into the correct order.

Each task in a bucket can be assigned to one or more people. As the only member of this plan I skipped that step, which left all of the tasks unassigned (whoops). I went back through them all to assign them to me, just to see the effect it has on the progress charts. Obviously with more than one member of a plan it makes sense to assign tasks to the appropriate person. Being able to bulk-assign tasks would also be useful, perhaps assigning someone to a bucket and having each task inherit that assignment.

After you get underway with your project and start marking tasks as complete, you can keep track of your progress with some neat charts. The overall status chart is good (everyone loves a donut), as is the per-member progress chart. Missing from this view is a per-bucket chart that I think would be really useful.

The list of tasks on the right of the screenshot above can be sorted by due date, bucket, progress, or assignment. It’s a useful view within a plan, but for some reason the sorting options are not all available for the My Tasks view. As an individual who is a member of multiple plans, I’d like to see what tasks I need to work on today, tomorrow, what’s overdue, etc. Currently I can only group my tasks by progress, or by plan. Within each list the ordering is completely random, with no sorting based on due date. Similarly, it would be useful to receive a daily digest of Planner tasks in the morning, or alternatively an email notification when a task is nearly due, and when it becomes overdue.

No doubt we’ll all be accumulating membership of plans over time, so it’s handy to be able to mark plans as favorites. Your favorite plans appear in the Planner hub with nice donut charts. However, as more and more Groups are created, whether they created in Planner or not, the “All plans” list grows quite large, and is not sorted in any discernible order (it’s definitely not alphabetical). So finding other plans to mark as favorites becomes a chore.

They also get added as favorites in Outlook. When I removed them from Outlook, they were also unmarked as favorites from my Planner hub. I suspect this is simply due to the integration between Planner and Groups, but I don’t necessarily want all of these plans to appear in Outlook.

The more I use Planner, the more I like it. But I also find more things that I think should be fixed or added to it. Items on my list that are already on the Office 365 roadmap are:

Microsoft Planner is certainly off to a good start, and I look forward to its continued development.