In prior versions of Exchange an organisation that wished to restrict who could send outbound internet emails could apply the restriction on an SMTP connector.  In this example emails sent to the * address space are rejected by default unless sent by a group listed in the “Accept messages from:” list, for example a group named “Internet Email Users”. 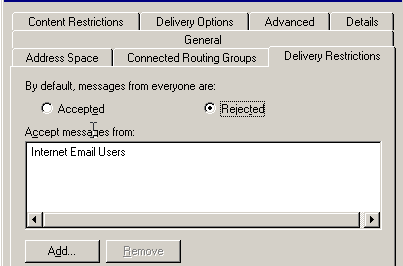 To configure the restrictions you create a Transport Rule that follows the same “Deny by default, except if from these groups” approach as Exchange 2003 Server.

The Hub Transport server caches recipient and distribution list information for four hours, so if you have a rule such as this in place and add new users to the Internet Email Users group, those users may not be able to start sending outbound internet email until the recipient cache has refreshed on the Hub Transport server.  Where this is not acceptable you can restart the “Microsoft Exchange Transport” service on each Hub Transport server which will initiate a cache refresh.