You are here: Home / Reviews / Review of CiraSync for Synchronizing Contact Lists to Mobile Devices

Disclosure – The author has been compensated to provide an honest opinion of the product in this review. You can read our full disclosure statement here.

I often see questions posted in forums, or emailed to me, about synchronizing contact lists to smartphones. The requirement is simple – businesses would like a way to create lists of key contacts, and have them synchronized to employee mobile devices.

The solutions are not always so simple. I’ve seen various solutions involving custom scripts, importing CSV files, and similar DIY approaches. The problem with those solutions are that you need to develop it in the first place, then maintain it over time. Although it seems to be an easy task at first, the list of requirements for such a script starts to grow once you start writing the code, and you need to think about:

Writing a bug-free script is far more effort than most IT admins assume it will be. A DIY approach also leaves the solution in the hands of IT, because custom scripts are usually unsuitable for handing over to non-IT people to operate.

For Office 365 customers there’s a better way of managing the synchronization of contacts to smartphones thanks to CiraSync. CiraSync is a cloud-hosted service that provides the capability to add, update, and remove contacts from your users’ mobile devices. Maintenance of the contact lists can be made the responsibility of the business, instead of the IT department. And CiraSync manages to do it without requiring you to deploy any special apps on your users’ devices. CiraSync also doesn’t use any Outlook add-ins, which tend to work poorly when trying to make the kind of bulk changes to multiple mailboxes that CiraSync is able to perform.

Getting Started with CiraSync

The signup process for CiraSync is as simple as authenticating with your Office 365 credentials. The same signup process is used whether you are a single user (what they refer to as Personal Edition), or planning to upgrade to the Enterprise Edition to manage contacts for your entire organization. CiraSync needs some access to your account in order to read and write information, so you’ll need to accept an authorization prompt for that. The account that you initially sign in with needs to be a licensed Office 365 user with a mailbox. If you’re planning to use the Enterprise Edition, the account must also be an Office 365 global admin. A lot of organizations don’t assign licenses to their global admin accounts, because they don’t need a mailbox. For CiraSync you’ll need to assign a license to the global admin account so that it has a mailbox while you do the initial set up. You can remove the Office 365 license afterwards for most synchronization tasks, however if you are using a public folder as the source for a contact list then the service account will still need a license (CiraSync recommends a Kiosk license as an inexpensive option for this scenario). 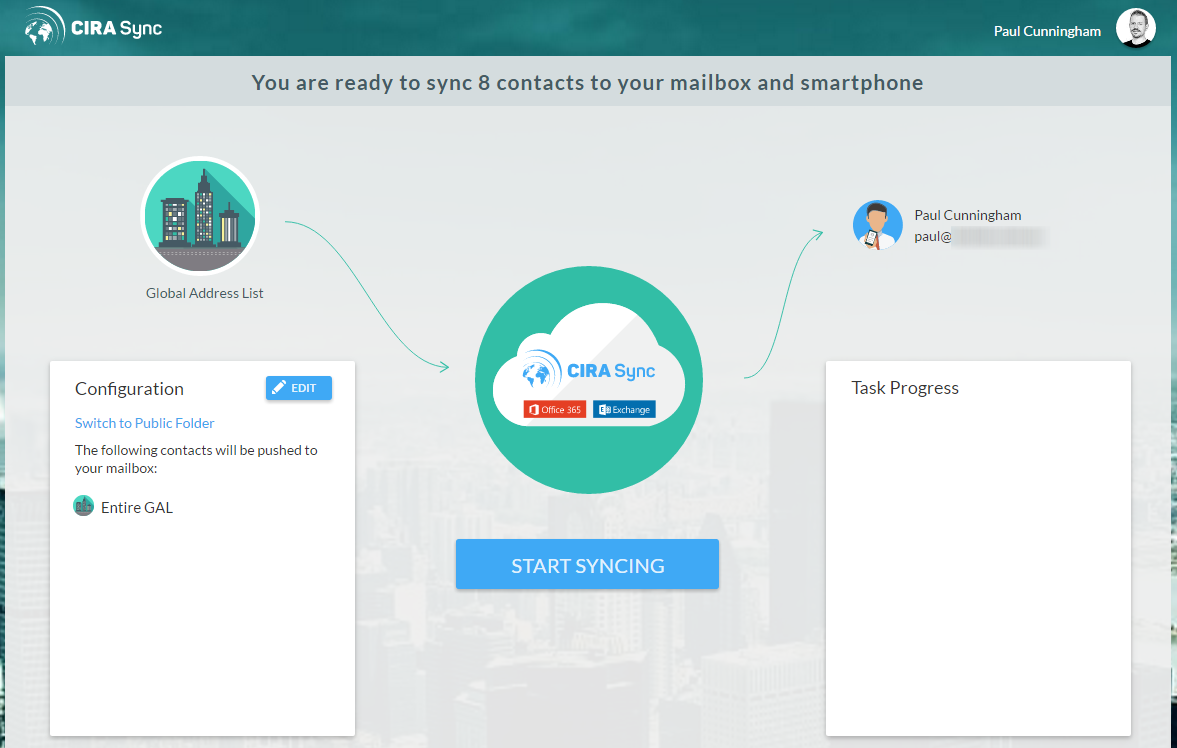 After the first login, I needed to perform at least one sync as a single user before I could proceed further. The default configuration is to sync the entire GAL to your contacts, which I have to assume is not what most Enterprise customers will want to do at this step. You can just pick one mailbox or contact from the GAL and use that for the initial sync, and then delete it afterwards. Alternatively, if you know you want to jump straight to the Enterprise Edition, read .

The sync process for the Personal Edition creates a CiraSync sub-folder in your mailbox Contacts folder, and the contacts you select are added into the folder in your mailbox by CiraSync. The contacts are then synchronized to your mobile device through your normal ActiveSync connection. That is how CiraSync avoids the need for a custom app to be installed on devices. It’s simple stuff, and the Personal Edition is certainly useful. But let’s take a look at what is available in the Enterprise Edition, which is much more powerful and flexible.

Within the CiraSync dashboard for Personal Edition there’s a button to upgrade to Enterprise Edition for 30 days (and up to 30 user licenses to use during the evaluation period). As I mentioned earlier, you can also just sign up to Enterprise Edition directly here. That link will take you directly to the authorization page to start setting up CiraSync for your tenant. This is where when the full global admin access to your Office 365 tenant is required, and broader permissions are granted for CiraSync to your tenant. After you’ve completed the authorization you’ll arrive at the CiraSync dashboard.

New contact lists in CiraSync can come from one of several sources. Bullhorn and Salesforce CRM integration are no doubt interesting for people who use those apps, but I’ll focus on the Exchange options here, which are Global Address List (GAL), Public Folder, and Shared Mailbox. Each of those sources will suit different scenarios, for example:

Although the initial setup of CiraSync requires global admin rights to your Office 365 tenant, you can then delegate tasks in CiraSync to other non-admin users so that there is less ongoing management required by IT.

CiraSync also caters for a dedicated service account to be configured, so even if you configure CiraSync with your own global admin account at first, you can switch to a service account for ongoing synchronization later. 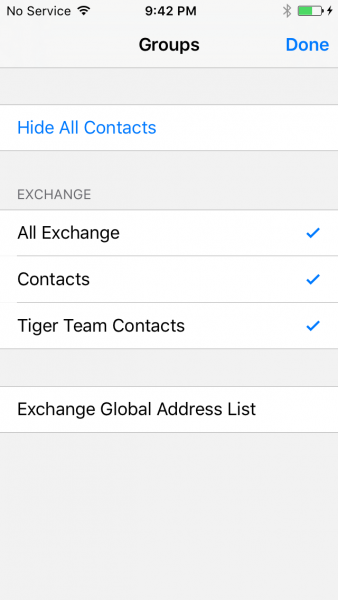 If that seems simple to you, that’s because it is. CiraSync can be up and running within a few minutes, far less time than you’ll spend just doing the research on how to write custom scripts for the same purpose.

One of my first concerns about CiraSync was how well it would handle collisions and errors. I thought about situations in which a person makes an edit to a contact on their phone, such as updating the number or adding a personal note to the contact. On the next synchronization from CiraSync, what happens to those changes?

As it turns out, CiraSync already thought of this. First of all, anything that is overwritten by CiraSync is logged to a history. If you run into problems with user changes being overwritten (perhaps they know the new phone number for a person), you can use the history to identify what was overwritten and fix up the master contact list.

Secondly, fields can be excluded from being synchronized. So you might choose to sync the name and phone number for a contact, but exclude the notes field so that people can make their own personal notes about a contact on their mobile device without it being overwritten later.

CiraSync’s ease of use makes it suitable for a wide variety of scenarios. In previous jobs that I’ve worked in we’ve had IT teams distributed across the entire country, and a number of third party vendors involved as well. Over the first year of the job I slowly accumulated the mobile phone numbers of each of my team mates, the on-call phone numbers for other IT teams, the numbers for various internal and vendor help desks, and the numbers for key contacts such as departmental managers. Any time I didn’t have a number already stored in my phone it would slow down the escalation process for a support issue, or I wouldn’t know who was calling me and whether I should be answering the phone on a weekend that I wasn’t on-call. If we’d had CiraSync in place at the time, all of those numbers could have been added to my phone automatically on day one of the job.

Throughout my career I’ve also been involved in a lot of IT projects where contact lists needed to be distributed and maintained during the project, especially during critical milestones such as migration weekends. Trawling through email looking for attachments, or trying to get access to a network share where the contact list is stored, are far less convenient that having the updated list synchronized to the mobile device that you’re already carrying with you.

When I spoke to some non-IT customers about CiraSync they quickly grasped the value that it provides. A common sight in customer offices is pieces of paper stuck to cubicle walls with various contact details on them, and a lot of handwritten changes to add new contacts, and scribbled pen to cross out the contacts that are no longer correct. Again, CiraSync is an obvious win for those customers.

CiraSync is simple to use, and fills a great need for many businesses. But no software is perfect, and there’s a few things I’d like to see added to CiraSync in the future.

The daily synchronization task for CiraSync can send a basic email notification. I’d also like the option to be alerted to any errors, such as sync collisions or warnings about licenses running out.

It’s also possible that some potential customers will have concerns about any caching of information that CiraSync performs. Being hosted in Azure datacenters should mean that many customers feel comfortable about the data that CiraSync caches, but some regions will not want to use a US-based service like this and will need to wait for CiraSync to expand into different Azure regions.

CiraSync also only works with Office 365 mailboxes. There is an on-premises version by the same company called “itrezzo” that performs the same role, but of course that means installing a server on-premises as well.

I wish this service had existed in pretty much every company I’ve previously worked for. That’s how useful it is. With no obvious problems, and just a few things I’d like to see improved, CiraSync is well worth your time to run an evaluation and see how useful it can be for your own business.

CiraSync has created a special offer for Exchange Server Pro readers. Use this page to sign up for a free trial and you’ll receive an extended 60-day trial of CiraSync Enterprise Edition for 60 users, so you can spend more time testing out the features and see just how valuable automatic contact sync is to your end users.

Sign up for a free trial of CiraSync Enterprise Edition