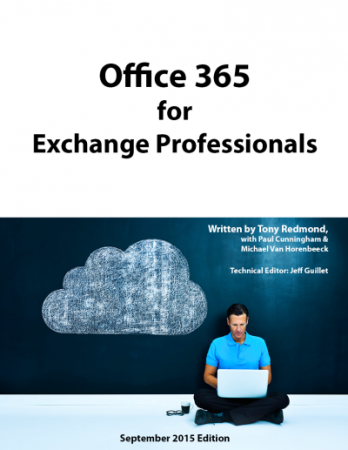 In May 2015 the first edition of our ebook Office 365 for Exchange Professionals was released. Co-authored by Tony Redmond, Michael van Horenbeeck and I, and with Jeff Guillet providing technical editing, we covered Office 365 from the perspective of Exchange admins over 18 chapters containing 630 pages of content.

At the time we committed to updating the ebook to remain current with the changes occurring in Office 365 (450 in the last year, according to Microsoft), and we released several minor updates and corrections since May to achieve that. There have also been major new features launched that we spent time exploring and understanding, participating in Preview programs, exploring best practices, and then writing new sections for the ebook. In fact, there are now 150 new pages of content ready to be released in the 2nd edition (September 2015) of Office 365 for Exchange Professionals.

As Tony puts it…

The second edition contains 150 pages of new content together with a heap of changes, updates, refinements, and responses to questions asked by readers. We have extensive coverage of Office 365 Groups, Delve, the Compliance Center, and the Import Service and consider the eBook to be up to date with the current state of Office 365 – or as close as we can make it.

There’s also the new AADConnect tool, Mobile Device Management, Advanced Threat Protection, and more. All up it is a significant update and we’re looking forward to releasing the new edition next week.

When will it be available?

The ebook is available now.

How to Get a Free Copy at IT/Dev Connections

If you’re planning to attend IT/Dev Connections next week you’ll have the chance to meet the author team and get one of 50 free copies of Office 365 for Exchange Professionals.

Binary Tree are hosting a special launch party for the new edition of the ebook on Wednesday, September 16th at 4:30pm. Get all the details and RSVP here. We’d love to see you there for a drink and to talk about Exchange and Office 365. Just remember to RSVP!

And I’ll see you in Las Vegas!