Skip to content
Is Exchange 15 the End of Edge Transport?

In his article Office 365 and the Development of Exchange 15, Windows IT Pro writer B.K. Winstead writes:

…it makes me wonder if in Exchange 15 or a later version of Exchange we might see the Edge server role disappear altogether, its function subsumed by the FOPE service. By all accounts, the Edge role hasn’t been widely used in Exchange 2010 or Exchange 2007 deployments as it is. Presumably, organizations are already using other security measures along the lines of FOPE and haven’t felt the need of the extra overhead of deploying the Edge role.

His comments are based on a quote from Microsoft’s Exchange General Manager Kevin Allison:

“The Edge server role and transport generally have been combined with what has traditionally been the FOPE stack,” Allison said. “We’re focusing on protection relative to the FOPE service coming on, focusing it on an online service versus something that we’re delivering as a server itself. Today in the Office 365 world, all of our message gateway into the product is through that edge service, which is now FOPE. And we’re transitioning the on-premises business into this online mode as well.”

Although customers I work with to this day run Edge Transport servers, I’ve certainly worked with plenty that do not. When I surveyed Exchange Server Pro readers last year on their usage of the Edge role these were the results: 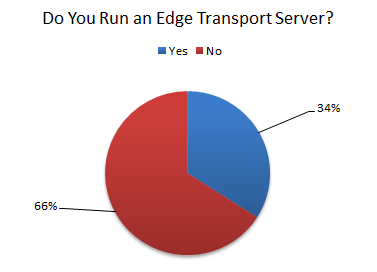 When the Edge Transport server role first appeared in Exchange Server 2007 the timing was awkward. Most customers I worked with at the time were well invested in third party email security systems, whether that be a dedicated server/appliance or a software product installed on the Exchange server itself.

The Edge Transport server didn’t have a compelling reason at the time for customers to make the switch. Although over the years I’ve seen plenty of scenarios where it is useful (for example, those customers with a specific security policy about allowing SMTP directly into the internal network), the emergence of cloud-based email security products, including those from vendors who previously made on-premise solutions only, has shifted the focus more in that direction.

Indeed, Microsoft’s own Forefront Online Protection for Exchange (FOPE) is a good option and makes a lot of sense considering the hybrid on-premise/cloud environments that are becoming more common. And with the engineering focus that Office 365 and FOPE receive these days, it can only get better.

Which just leaves those 34% of survey respondents above. If the Edge role disappears in Exchange 15 then 1/3rd of organizations may be faced without a simple “like for like” migration scenario to move to Exchange 15. Historically Exchange Server customers have not been happy to have major features with decent adoption rates taken away (case in point, public folders are still around and many organizations still strongly depend on them).

Perhaps Exchange 15 will be the Edge Transport server role’s “one last time”.

What do you think? Does Exchange 15 need to maintain the Edge Transport server role? Or has it become irrelevant in your organization?