Here is a screenshot (with customer info removed) of the final dialog for an Exchange 2007 mailbox move wizard.  This particular move involved two mailboxes being migrated from one side of the country to the other. 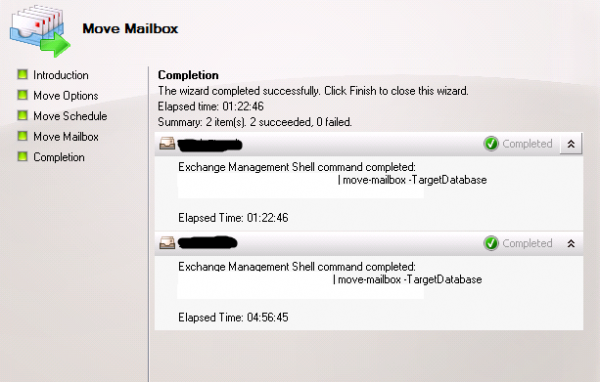 On closer inspection you might notice a discrepancy in the reported times.  The elapsed time noted in the summary says 01:22:46, while the elapsed time for the second mailbox says 04:56:45.  How can one mailbox report to have taken longer than the total elapsed time for both mailboxes?

The answer is that there is a bug in how Exchange Server 2007 reports the time on very long mailbox moves.  In this case I happened to be monitoring the process as it was around 23hrs along.  At that point the second mailbox, the 2.5Gb one, had already finished moving having taken 04:56:45 as reported correctly in the screenshot.

This is no doubt a bug, but one that I’ve never seen come up before.  I imagine not many people have mailbox moves that run for longer than 24 hours, or if they do they may not bother to take note of the reported elapsed time.

To be honest the only time I can think of where this bug might cause problems is if you set off a mailbox move as a test to determine what kind of speeds you’re going to get when you do your production migration, walk away and come back more than 24 hours later, and it happens to have taken longer than 24 hours to complete, then the wizard is going to show you a misleading result that could skew your entire product mailbox migration planning in a big way.

Probably not going to affect anyone like that, so its more amusing than alarming.