The Exchange 2016 migration for Not Real University is getting to the stage where they can start cutting over client access and transport services to the Exchange 2016 Mailbox server. This stage is referred to as coexistence. Before any services are cut over, there’s some preparation tasks to perform.

First, it’s advisable to perform a general health check of the existing production environment. The reason for performing a health check now is to determine if there are any existing problems that you might not already be aware of. If you start a migration, then notice the problems, troubleshooting is more complicated because you will be unsure whether the problem has been caused by the migration or not.

To perform a health check you can:

The following command will display the Outlook Anywhere configuration for Exchange 2010 servers.

If the IISAuthenticationMethods are configured for Basic only, then the following command will add NTLM authentication as well.

The default OWA authentication settings for a newly installed Exchange 2016 server are:

If you have a different logon format requirement you should make those changes to the virtual directory settings now before you cut over any namespaces or move any mailboxes. For example, Not Real University uses the user principal name (UPN) as the logon format, which matches the users’ primary email addresses. 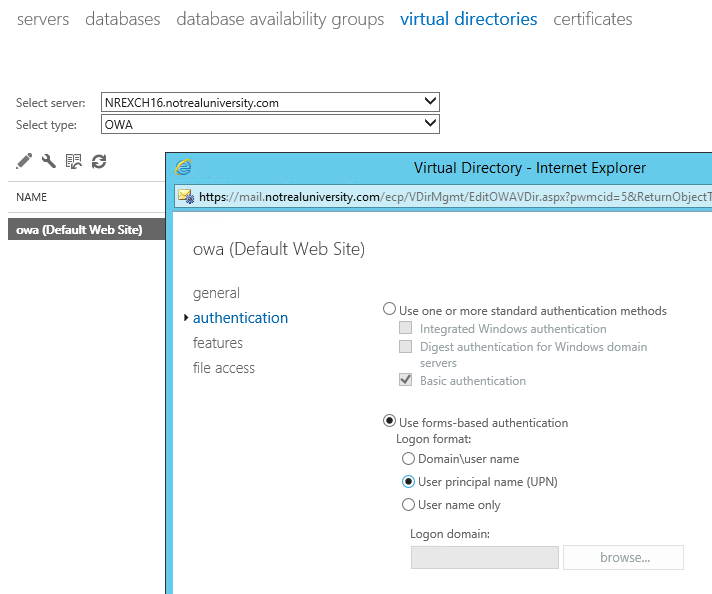 To avoid an unexpected problem, it’s advisable to test the client access change before you modify the DNS record. To perform this test you can use a hosts file entry on a test workstation, to point that single client’s connections to the Exchange 2016 server. You can follow the steps outlined in this article to modify the hosts file.

The final task before any production services are cut over to Exchange 2016 is to move the arbitration mailboxes. Arbitration mailboxes are responsible for things like transport moderation and audit logging, and need to be hosted on the highest version of Exchange in the organization. The mailboxes themselves are typically quite small and will move fairly quickly.

In the Exchange Management Shell, run the following command to move the mailboxes to a database on your Exchange 2016 server.

In the next article in this series, we’ll look at performing the cutover of the client access namespaces to Exchange 2016.