This information is synchronized at regular intervals through a process called EdgeSync.

For EdgeSync and mail flow to work there are a few network ports that need to be open on the firewall between the Internet, the Edge Transport server, and the internal Hub Transport server. 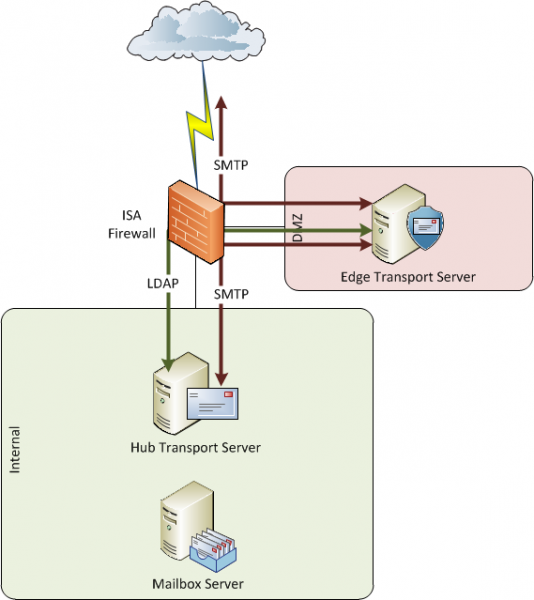 If you are using ISA Server 2006 as your firewall and want to create the access rules for the Edge Transport server the first thing you’ll need to configure is a new network protocol for the secure LDAP connection. ISA Server 2006 is pre-configured with a secure LDAP protocol however the EdgeSync process uses the non-standard port of TCP 50636. 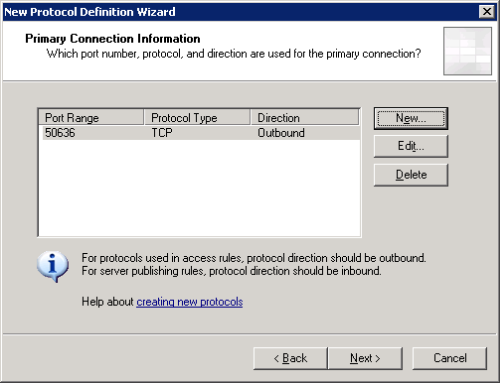 With the firewall access all configured correctly the next step is to configure the Edge Subscription itself.

On the Edge Transport server open the Exchange Management Shell and run the following command using the New-EdgeSubscription cmdlet.

There are two important things to be aware of here:

Copy the “edgesubscription.xml” file to the Hub Transport server. Launch the Exchange Management Console and navigate to Organization Management/Hub Transport.

In the Actions pane click on New Edge Subscription. 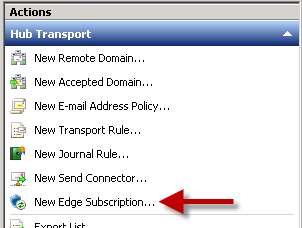 Browse and select the Active Directory site to be subscribed, as well as the XML file that you copied from the Edge Transport server.

After the Edge Subscription has been created you will see two Send Connectors configured for your organization.

It can take up to an hour before the first Edge synchronization process runs, but you can run it manually if you need to. On the Hub Transport server launch the Exchange Management Shell and run the following command using the Start-EdgeSynchronization cmdlet.

After the initial Edge synchronization has occurred you will be able to see the Send Connectors and Accepted Domains configured on the Edge Transport server.

After the Edge Subscription is in place and you’ve synchronized at least once you can send email between your Exchange organization and an external mailbox, and then inspect the email message headers to verify that the messages are traversing your Edge Transport server.