During an upgrade of Exchange Server 2013 to a new cumulative update some customers may experience an issue where setup fails, leaving the server in a non-operational state.

The error thrown by setup is:

This error is caused by a receive connector conflict. When the error occurs setup stops, but unfortunately it has already removed the previous build of Exchange in readiness to install the newer build. So the server is left in a completely non-operational state.

In this article I’ll explain:

Why This Error Occurs in the First Place

The reason that this error occurs is that the server has two (or more) receive connectors bound to different transport services that are trying to listen on the same IP address and port number. My fellow Exchange MVP Andrew Higginbotham has a very detailed explanation of this here.

Every Exchange 2013 or Exchange 2016 server is configured with a set of default receive connectors that follow a standard naming convention that includes the server name.

Two default receive connectors are homed on the Transport service:

You should not modify or remove the default connectors. Any other connectors on the server are likely to have been manually created, and that’s where the problem can occur. The short version is that when creating the receive connector the wrong transport role was chosen. 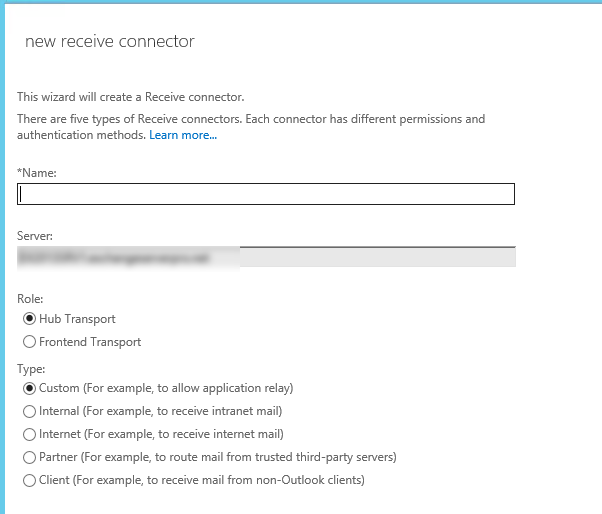 Fortunately the most recent builds of Exchange Server 2013 (SP1 and above, from what I’m told) contain logic to prevent an administrator from choosing the wrong option and causing the connector conflict.

Of course, that doesn’t help customers who have perhaps deployed the RTM version of Exchange Server 2013 first, and then later tried to upgrade to the latest CU. This is more common than you might think it would be, due to some customers acting with the incorrect assumption that the RTM build needs to be deployed first before any service packs or cumulative updates are applied.

Those customers, if they happen to have created conflicting receive connectors, are going to have a bad day when they upgrade. So let’s look at how to fix it.

For organizations with multiple Exchange 2013 servers the fix is simpler, because you can still access the Exchange Admin Center on one of the operational servers. In mail flow -> receive connectors you can select the non-operational server and see the list of connectors on that server. In this example the connector named “Test” is highlighted, and you can see that it is bound to the “HubTransport” role.

That same connector name was in the error that was thrown by setup earlier, which is how you know which connector(s) to look for.

The values that you specified for the Bindings and RemoteIPRanges parameters conflict with the settings on Receive connector “EX2013SRV2Test”. Receive connectors assigned to different Transport roles on a single server must listen on unique local IP address & port bindings.

To change the role for the connector open the Exchange Management shell and run Set-ReceiveConnector as follows.

For single server organizations it’s a little tricker. With no operational Exchange 2013 servers the management tools can’t be used. Instead we need to dive into ADSIEdit.msc to fix the connector. Launch ADSIEdit.msc and connect to the “well known Naming Context” of Configuration.

Modify the value from 32 to 16384 on your receive connector and then apply the change.

After taking either of the corrective actions above re-run the cumulative update and setup should proceed past the failed step and complete successfully.

How to Check for this Problem Before Running an Update

As I mentioned earlier there is logic in current builds of Exchange Server 2013 that should prevent this issue from occurring in future, but for those of you reading this who are planning to upgrade from a very early version of Exchange 2013 you might be concerned and want to avoid the problem entirely. There are two ways to do this.

The first is to simply open your Exchange Admin Center and look at the receive connectors on your servers. If you see custom connectors that you’ve created and that are bound to the Hub Transport role then you can pro-actively apply the Set-ReceiveConnector fix demonstrated above and you should be fine from there.

If you’re still unsure then you can simply run the same PowerShell commands that setup is executing when it throws the error. I’ve adjusted them slightly here for readability and added the -WhatIf switch so that Set-ReceiveConnector doesn’t make any actual changes to your configuration.

Pasting those lines into the Exchange Management Shell and pressing enter will check all of the receive connectors in your org for the conflict.

As you can see this is an unfortunate error condition that has quite a severe impact on Exchange 2013 servers during an upgrade. In particular, single server organizations are left with no operational servers at all after this error occurs. Hopefully anyone in that situation will be able to quickly find the solutions demonstrated in this article and get their server up and running again.