In the last part of this Exchange 2016 migration series we looked at installing the first Exchange 2016 Mailbox server into the Not Real University organization. Now it’s time to configure the client access services for the new server.

The Exchange 2016 client access namespace configuration can be performed using the Exchange Admin Center, but that’s the slow way of doing it. Instead, let’s use a PowerShell script that is built for this purpose, called ConfigureExchangeURLs.ps1. You can download it from the TechNet Gallery.

To configure the Not Real University Exchange 2016 server, the command is:

Next, the SSL certificate needs to be configured. If you’re new to the topic of SSL for Exchange, you can learn more about it here. Not Real University is using the same certificate that is already in use on the Exchange 2013 and 2010 servers, so the steps are:

For environments where a new certificate is required, the steps are:

After the SSL certificate has been installed and enabled, restart IIS on the server for all of the recent changes to take effect.

In the next part of this series, we’ll look at configuring mailbox databases. 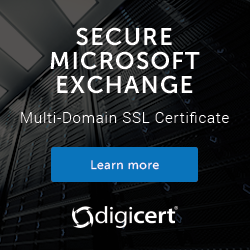