This tutorial demonstrates how to install an Exchange Server 2007 Mailbox server on Windows Server 2008. It is assumed that you have already extended the Active Directory schema for Exchange 2007.

On Windows Server 2008 the pre-requisite roles and features for the Exchange 2007 Mailbox server role can be installed using ServerManagerCmd.exe.

Launch an elevated command prompt and run the following command.

Next download the Windows Installer 4.5 file from Microsoft and install it on the server. The Windows6.0-KB942288-v2-x64.msu file is the correct one for a 64-bit Windows Server 2008 server.

A restart will be required before you move on to the next step.

To install the Exchange 2007 Mailbox server role download the Exchange Server 2007 SP3 setup files from Microsoft and extract them to a folder on the server’s hard disk.

Launch an elevated command prompt and run the following command.

Reboot the server before proceeding to apply the latest updates and configure the server for your environment.

An optional step is to install the Office Filter Pack and register the IFilters so that Exchange Server 2007 can index those file types.

You can find the instructions and the script to register the IFilters here. Copy the script into Notepad and save it as Exchange_reg.vbs. 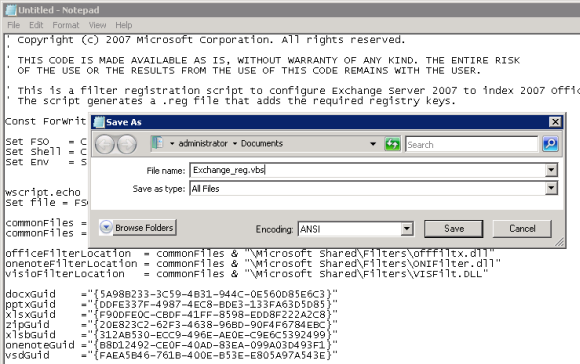 The script creates a registry file for you in the same folder.

The script tells you to restart the Microsoft Exchange Search service. Open a PowerShell window and run the following command.

You then need to run this command to start the dependent service that was stopped by the command above.

The IFilters are now registered and Office file types can be indexed and searched on the Exchange server.