Exchange Server 2019 was released in 2018. For the first time in Exchange history, it seems that the release wasn’t really celebrated enough by both the Microsoft PG and the community. A reason for this could be that it feels like another “step” Exchange Server upgrade only, with a few additional features. Just look at the build number: 15.02.0221.012, more proof indicating that this upgrade is not seen as a major step. It also appears that Microsoft didn’t even change the Exchange logo color for this release, as you see here in the Exchange 2019 Setup screen: 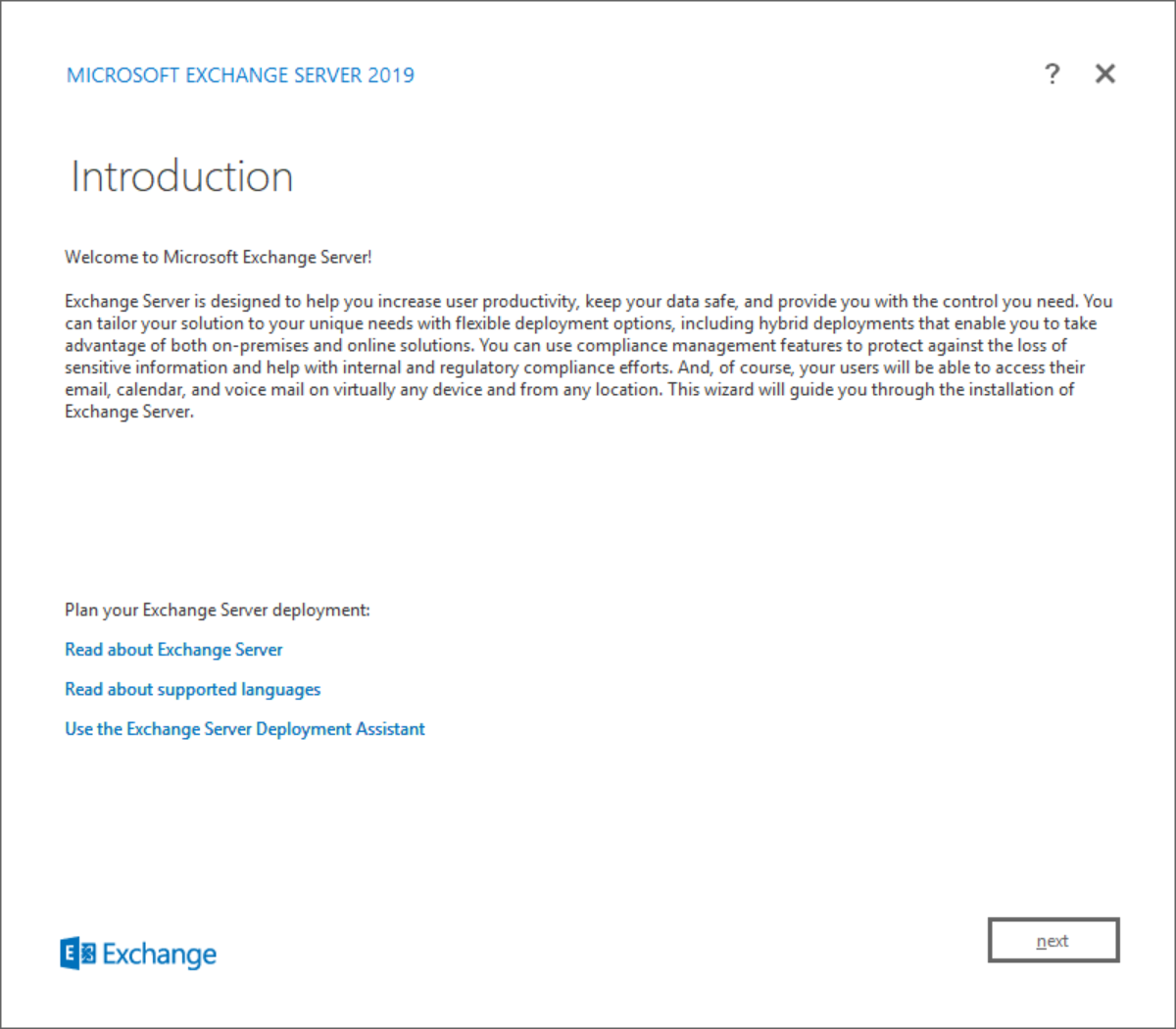 Anyway, let’s look at the cool new features of Exchange 2019.

Exchange Server 2019 hasn’t come with a ton of new features, so this article is a summary of what I think are the most interesting features. In the coming weeks, I’ll write up another article on Practical 365 taking a deeper dive into its new features.

The MCDB feature improves the existing Exchange database engine to support larger disks (JBODs up to 16 TB) and SSD disks to work together and provide better overall performance. The larger disks will still store the mailbox databases and if you add SSDs they will store Exchange mailbox meta information such as the folder structure of a mailbox, metadata of items or even small items. This allows faster logon times, quicker response times and less latency which is especially important if you have a lot of Outlook Online Mode users, Outlook in a virtual desktop infrastructure (VDI) environment. If you want to use MCDB, the general recommendation is to add 1 SSD disk for each 3 JBOD disks.

You do not need to add SSDs to your environment if you plan to use the Exchange databases just in the same way as Exchange 2016.  You won’t be able to use the MCDB feature, however.

In previous Exchange versions, each Exchange database, no matter if actively mounted or passive, got the same amount of cache memory assigned from Exchange. DDC now allocates more cache memory to active databases and reduces memory of passive ones.

As the active databases receive more memory, this means that more of the database is stored in the cache, therefore, more database reads are done using the memory, so the overall performance will be better. In addition, every time a failover occurs, the server memory will be automatically re-aligned thus the memory usage will be dynamically adjusted to all active databases.

Search index is now part of the mailbox

Exchange 2019 now changes this behavior and moves the search index from an own folder on your Exchange server to the mailbox that it uses. The benefit here is obvious: any updates to the search index automatically replicate to all Exchange databases copies of the mailbox. Therefore, during failover, the database failover times should decrease, and the search architecture is faster and more reliable.

Gone are the days where a corrupt search index stopped you from activating a passive database.

Hurray! Now you can now install Exchange Server 2019 also on Server Core!  This was a missing feature that we longed for since Exchange 2010 introduced Remote PowerShell. I know many Exchange Admins would have loved to have had Exchange running on Server Core. Finally, 8 years later we’ve got the feature, but with a weird flavor. So I ask myself the question ‘is it still necessary’? The two benefits of Server Core are obvious: to reduce the memory footprint of Exchange and to reduce the attack surface in general. Over the past few years, hardware power dramatically increased and I never heard of any Exchange Server hacks being caused. In my opinion, I doubt that Exchange Admins will really need it.

Exchange 2019 also comes with a couple of enhancements, especially for calendaring in Outlook on the Web (OWA), for other clients such as Microsoft Outlook:

Exchange 2019 also includes support for EAI so you can use non-English characters in email addresses and they are to be routed and delivered natively. This allows you to have for example an e-mail address in Greek alphabet such as δοκιμή@παράδειγμα.δοκιμή or with German characters such as Rüdiger.Müller@testmäil.de. Currently, you can send and receive to/from an external user with EAI addresses, but not yet add an EAI proxy to your Accepted Domains. I guess we will need to wait for a future Exchange 2019 Update until this feature is available. 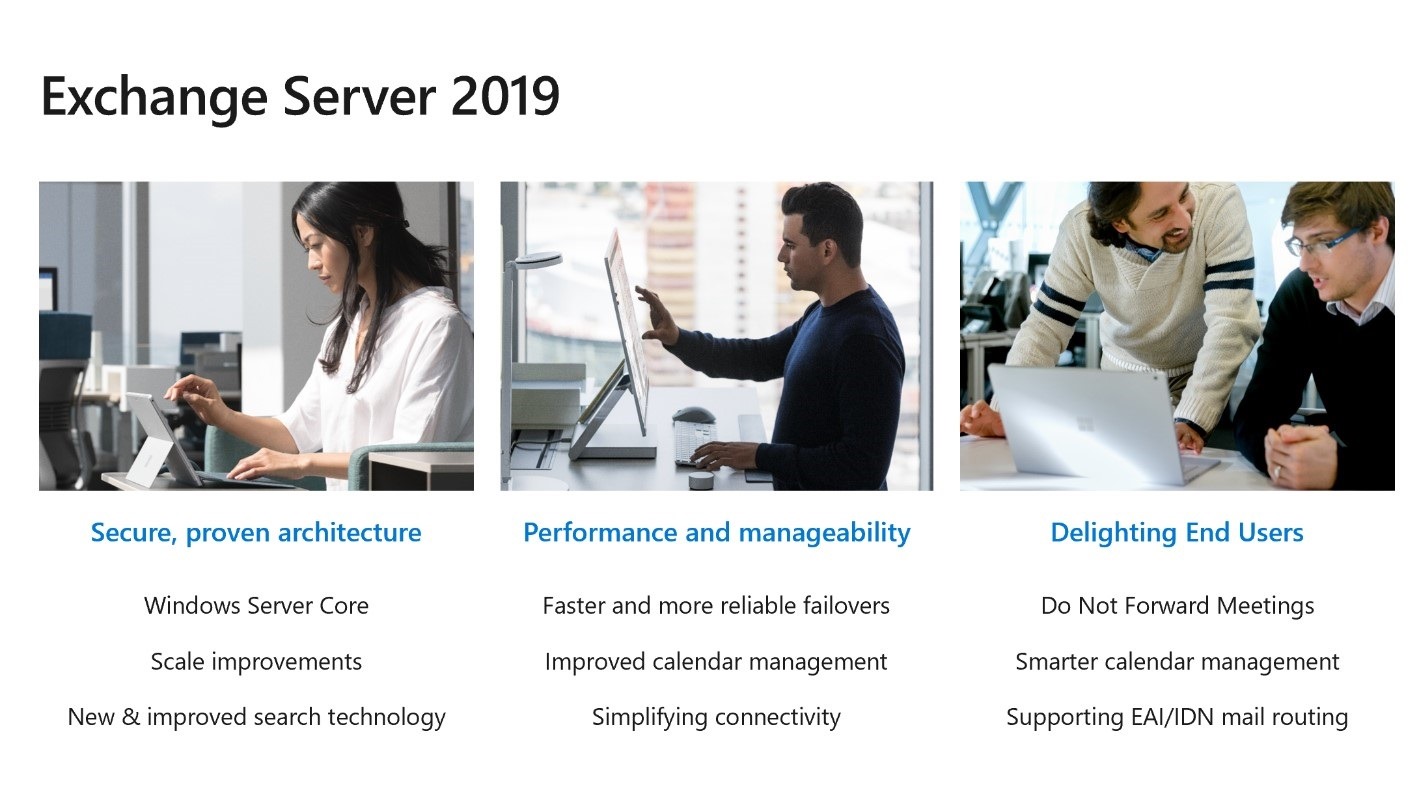 Microsoft has also retired some of the features of previous versions of Exchange in Exchange 2019:

Unified Messaging was introduced with Exchange 2007, and realistically never changed since Exchange 2010. I don’t even know if there was still a Unified Messaging team in Microsoft ever since the 2013 release. Realistically, as Microsoft developed Cloud Voice Mail and Auto Attendant, it was a logical move to retire this feature in Exchange Server 2019. All Unified Messaging settings and functionality in Outlook, OWA or ECP such as play a voice mail in preview will not be available anymore.

If you’re using Unified Messaging in Exchange today before moving your users to Exchange 2019 you need to either: implement Skype for Business Server 2019 so you can use Cloud Voice Mail, or switch to a 3rd party Voice Mail.

When you move your Unified Messaging-enabled mailboxes to Exchange Server 2019, this will disable unified messaging for the mailbox, but preserve existing voicemails as attachments.

No Hybrid License for Exchange 2019

Microsoft will not offer a free Hybrid License for Exchange Server 2019. The free hybrid license made the most sense in my experience when you’re on Exchange Server 2007, as it allowed you to deploy Exchange 2010 or later and connect to Exchange environment to Office 365 to perform a smooth mailbox migration of your users to Exchange Online. Today as Exchange 2007 and 2010 are out of official support, and as Exchange 2013, 2016 and 2019 fully support a hybrid deployment, you don’t really need the free license anymore. If you still need it, you can still implement Exchange 2016 to your environment.

No direct upgrade path from Exchange 2010

Looking at Exchange 2019, these are the features I feel are missing this release:

Now the final question arises, is it wise to upgrade to Exchange 2019 or not?

Yes, do the upgrade. If you require the new features immediately, I would definitely recommend waiting some time (maybe until the next CU), so you are not exposed to the “early” bugs of a new Exchange release. If you still decide to go ahead and install Exchange 2019 in your environment, don’t forget to search for any Exchange 2019 updates such as the “Update Exchange 2019 RTM cipher suites to support HTTP/2” released on 25.10.2019 available here: https://gallery.technet.microsoft.com/Update-Exchange-2019-RTM-a65d0325. Remember: you definitely need to wait until Windows Server 2019 is released before you go forward and install Exchange 2019 in your environment.

No, do not do the upgrade. If you use Exchange Unified Messaging currently in your environment, you will not have a Volume License Agreement with Microsoft or, if you need to stay on older versions then you can’t upgrade to Exchange 2019, for example Exchange 2010. I know some companies that still have Exchange 2010 up and running to preserve their Public Folder infrastructure because they have more than 1 million Public Folders in their environment.

Overall, I think it’s a good release. It would take a while to plan any deployment today, so hang tight regarding the Windows Server 2019 release. Make sure you keep your eyes peeled for upcoming blog posts on Practical 365 for further exploration into Exchange 2019 and it’s featyres.

Siegfried is a Microsoft MVP for Office Apps and Services. He has great expertise in Office 365 implementations with a special focus on Security, Messaging and Identity for international customers.