The first article in this series on Exchange Server 2013 Database Availability Groups provided an overview of Exchange 2013 DAG concepts.

In this article we’ll go through the installation of a simple Exchange 2013 DAG with two members. The DAG will have a MAPI network as well as one replication network. The file share witness will be another member server in the domain that has no Exchange 2013 server roles installed.

Database Availability Group members run the Mailbox server role. Although they can also run the Client Access server role this is separate and not required for DAG operations. In some situations the Client Access role should not be installed on the same server, for example:

In my example scenario I have two servers E15MB1 and E15MB2 both running Windows Server 2012. Each server is installed with both the Client Access and Mailbox server roles. A third server E15FSW exists for the file share witness.

Note: thanks to the concept of “incremental deployment” a DAG can be created using existing mailbox servers that are already in production with active mailboxes on them. There is no hard requirement to build brand new mailbox servers to be able to deploy a DAG.

Because the file share witness server is not an Exchange server some additional permissions are required. The Exchange Trusted Subsystem group in Active Directory must be added to the local Administrators group on the server. 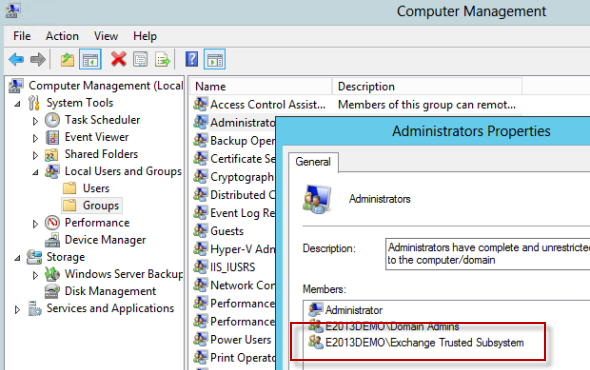 And you should verify that File and Printer Sharing is allowed through the firewall.

If the file share witness is another Exchange server, such as a Client Access server, it already has the correct permissions configured.

The configuration of the network interfaces is important for DAG network auto-config to be successful. For more information see Misconfigured Subnets Appear in Exchange Server 2013 DAG Network.

In my example the server E15MB1 and E15MB2 had databases that were automatically created during Exchange 2013 setup. To prepare for database replication within the DAG I performed the following tasks:

Those steps may not be required in your environment depending on your existing databases.

Depending on your environment the pre-staging of the Cluster Name Object (CNO) may be required (it is a requirement if you are running Windows Server 2012 for the DAG members), but in any case it is a recommended best practice.

The CNO is simply a computer account object in Active Directory. There are two methods you can use to create the CNO.

The first is to manually create the CNO using Active Directory Users & Computers. Create a new computer object with the name that you intend to give to your DAG. Then disable the computer account.

Next, grant the computer account for the first DAG member Full Control permissions for the CNO computer account. Note that you may need to click the View menu in AD Users & Computers and enable Advanced Features before you can see the Security tab for the computer object. 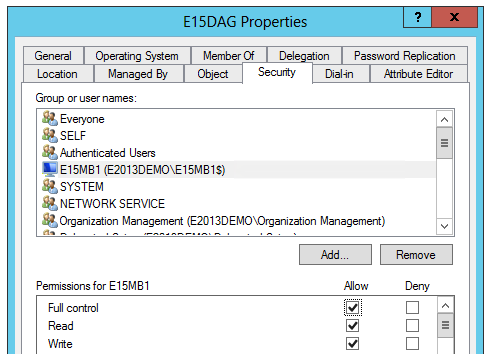 The other method for creating the CNO is to use Michel de Rooij’s Cluster Name Object Pre-Staging script.

In the Exchange Admin Center navigate to Servers -> Database Availability Groups and click the + icon to create a new DAG.

Enter the following details for the new Database Availability Group:

Click Save when you have entered all of the required details.

After the DAG has been created it still does not contain any actual members. These need to be added next.

Add the servers that you wish to join the DAG and then click Save. This process will install and configure the Failover Clustering feature of Windows Server 2012 and add the new DAG members to the cluster.

Note: if you’re using a non-Exchange server for the file share witness, and you have correctly configured the permissions on the FSW, you will still see a warning at this stage that the Exchange Trusted Subsystem is not a member of the local administrators group on the FSW. This is a bug that can be disregarded.

When the operation is complete the Database Availability Group will display the members you added.

In the next part of this series we will look at configuring the database copies in the DAG.