If you’re running an Exchange 2016 database availability group, and one of the DAG members fails, you can recover the DAG member to restore the high availability of your Exchange mailbox databases. Providing that your DAG is healthy and configured correctly, your remaining DAG member(s) should be able to maintain service availability while you perform the recovery.

Recovering a failed DAG member makes use of the Exchange recovery installation method, which reinstalls Exchange onto a server of the same name and pulls configuration information from Active Directory. However there are some additional steps required before and after you perform the recovery install.

For this demonstration scenario I have a two-member Exchange 2016 DAG named EX2016DAG01 with the following members:

Removing the Failed Member from the Database Availability Group

The failed member needs to be removed from the DAG configuration by running the following commands. First, the database copies on the failed DAG member are removed. They should have a status of ServiceDown, and you can remove them with the Remove-MailboxDatabaseCopy cmdlet.

Next, remove the failed server from DAG membership using the Remove-DatabaseAvailabilityGroupServer cmdlet. The -ConfigurationOnly switch is used to make the change in Active Directory without needing to communicate with the failed server.

The failed DAG member also needs to be manually evicted from the underlying Windows Failover Cluster.

If the AD site has an Edge Transport server subscribed, you’ll need to remove the EdgeSync credentials from the Exchange server using ADSIEdit. If you don’t complete this step, Exchange setup will fail with the following error:

The internal transport certificate for the local server was damaged or missing in Active Directory. The problem has been fixed. However, if you have existing Edge Subscriptions,
you must subscribe all Edge Transport servers again by using the New-EdgeSubscription cmdlet in the Shell.

To remove the EdgeSync credentials, open ADSIEdit and connect to the well known naming context of “Configuration”. Browse to Services -> Microsoft Exchange -> Your Org Name -> Administrative Groups -> Admin Group Name -> Servers. Right-click the server object and select Properties. Find the msExchEdgeSyncCredentials attribute in the list, and edit it to remove all entries. 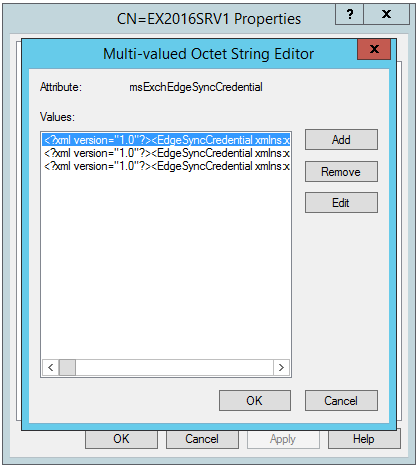 Replace or rebuild the failed server with a new installation of Windows Server, using the same computer name as the failed server, and join it to the Active Directory domain. You should configure the server to match the failed server and your other DAG members in terms of networking and storage. Once you have the server ready, you can check which build of Exchange 2016 to install by running Get-ExchangeServer from a healthy Exchange server and noting the build number.

The failed server in this demo, EX2016SRV1, was running Exchange 2016 Cumulative Update 1 (you can check build numbers here).

Performing a Recovery Install of Exchange 2016

Open a CMD prompt, navigate to the folder where you’ve mounted the Exchange 2016 ISO or extracted the setup files, and run setup with the following parameters.

Wait for setup to complete, then restart the server.

Add the Recovered Server as a DAG Member

After restarting the server you can add it back to the database availability group.

After adding the DAG member, you can add the mailbox database copies as well.

Since every environment is different, here’s a few additional steps you might need to look at as well: