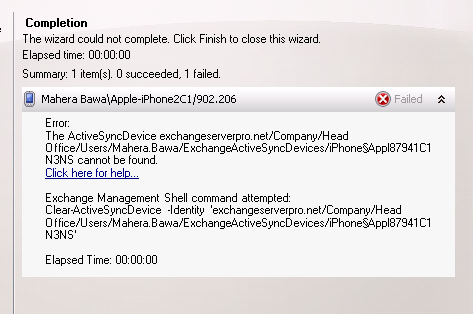 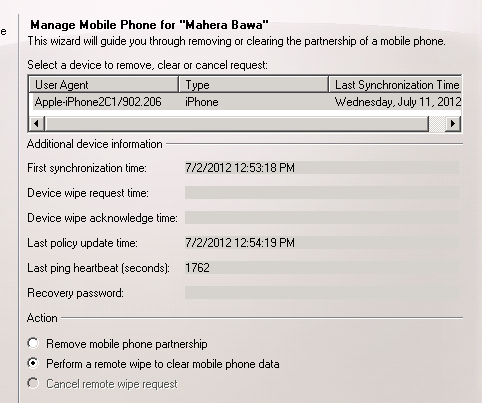 In this situation the error occurs.

Checking for the Problem in Your Exchange Organization

I’ve written this short script to check for the issue.

Copy that code into Notepad or your ISE and save it as EASDeviceIDs.ps1, then run it from the Exchange Management Shell.

If all is well then you should see a result similar to this:

If there are any mismatches detected you should see this type of result instead:

Looking closer at the two yellow identity strings, the problem is clear. When the user was moved from Head Office to Branch Office the mismatch was created.

Resolving the Problem and Performing a Remote Wipe

The most obvious solution is to move the user object back to its original OU. However this is not always going to be practical, so other options are needed.

According to my testing the different remote wipe options have the following results.

If the user themselves performs a remote wipe via the Exchange Control Panel it still works, and the device is wiped successfully assuming all other requirements are met.

A remote wipe issued from the EMC will fail if the user object is not first moved to its original OU at the time the device association was created.

As with the user-initiated remote wipes this option appears to work fine even if the identity mismatch is occurring. 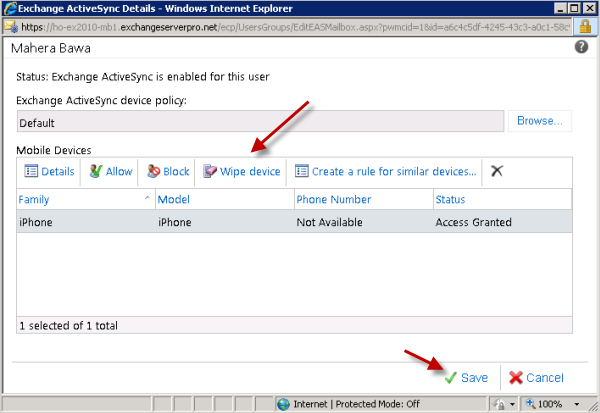 If an administrator uses PowerShell and the Clear-ActiveSyncDevice cmdlet to perform the remote wipe, it will be successful as long as the correct identity is specified.

I’ve written a script to detect the mismatch and use the correct identity for the remote wipe.

Firstly, if the user has no ActiveSync devices associated then the script will not do anything further.

If the script detects a device association but the identity values match, then it will let you know and do nothing further.

If the script detects an identity mismatch, then it will let you know and then initiate the remote wipe using the identity that will work. You’ll be prompted to confirm this.

In my own test lab this seems to work fine however there may be real world scenarios where it does not, so please feel free to leave a comment below if you encounter a situation that this doesn’t fix.

Here is the script code.

Copy the code into Notepad or your ISE and save it as Clear-EASDevice.ps1. To execute the script run a Get-Mailbox for the mailbox you want to target, and pipe that into the script.

You can append an notification email address to the Clear-ActiveSyncDevice command in the script as well, for example:

This appears to simply be a bug in how Exchange detects a user object that has moved between OUs and does not update both identity values correctly.

Or perhaps the issue is that the Clear-ActiveSyncDevice cmdlet as it is executed from the management console is referencing the wrong object’s identity value, since we seem to be able to work around the problem by specifying the correct one in the shell.

You may find it simpler to just use the Exchange Control Panel to initiate your remote device wipes. However the scripted option is available if you prefer that.