On an Exchange 2013 server running Exchange 2013 RTM CU1 or later you may be presented with a warning message after adding a new mailbox database. 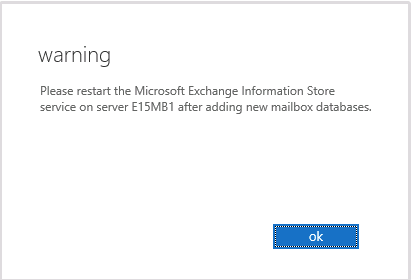 Despite the warning the new database will mount and be available to host and serve mailbox data.

The warning did not appear in Exchange 2013 RTM, although the reasons for the warning were present in RTM.

To help you understand this warning here is a slide from the Exchange Server 2013 Architecture Deep Dive session at TechEd Australia 2012. 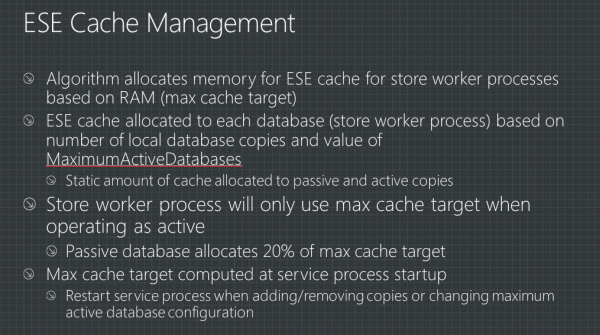 As Scott Schnoll explains in the presentation, in previous versions of Exchange the entire ESE cache would be allocated to the Information Store (store.exe) process.

In Exchange 2013 a change was made so that each individual database now runs as a separate worker process, and therefore each worker process has their own ESE cache.

The server needs a way to allocate each worker process a share of the available memory for ESE cache. The factors for this allocation are:

Scott also makes the point in the video that this applies when you make significant changes to your database layout. This may mean that the implications for adding a single database are not that serious, hence the warning rather than a hard error.

However, this is a new operational challenge for Exchange administrators so the best practice for this has yet to be established. At face value it appears that database creation is no longer an “anytime” activity with no impact.

To quote Scott from that session recording:

“Hopefully that is something that will change at a later date…”

So what to do about it? We know the warning is valid, so if we assume that the implications for not taking the advice are serious then we have to restart the service.

Standalone Mailbox Servers – there is no alternative but to restart the Information Store service during an arranged outage window.

Database Availability Group Members – after adding a new database and configuring the desired database copies, a series of rolling restarts of the Information Store services across each DAG member would then be required, putting each server into maintenance mode then taking it out of maintenance mode again. This would be a similar process as installing cumulative updates.

I would anticipate that if this warning condition remains in place that database creation will become a planned maintenance activity that occurs during the same window as monthly security patching or quarterly cumulative update installation.

For a deeper look at the reasons behind this check our Tony Redmond's article here.

What are your thoughts on this?