Skip to content
Is MEC 2014 a Hint at the Future of Microsoft Exchange Server?

Microsoft has announced that the next MEC (Microsoft Exchange Community) conference will be held in April 2014 at a yet to be disclosed location. 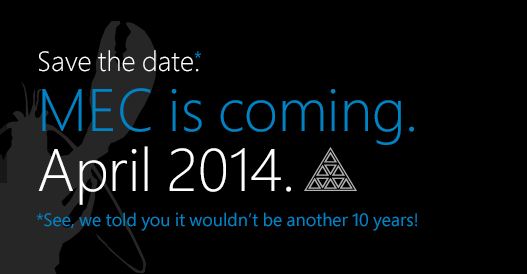 The timing is interesting (to me at least) in that it is about 18 months after the last MEC, which was held in Orlando in late September 2012, and almost 2 years after the Exchange 2013 Preview was released.

Considering the new Exchange 2013 servicing model with the 3 month “cumulative update” release cycle I would imagine we’ll be seeing quite an evolution in the product by the time April 2014 rolls around. This may mean that Microsoft has a lot of new and exciting features to present to the community.

Another theory is that a whole new “version” of Exchange will be released around that time. This was flagged in a comment on Tony Redmond’s Exchange Unwashed column regarding MEC:

Sounds like a Wave 16 release party to me. Being that the Lync/Skype team announced a new server version around the same time frame.

That is based on a blog post by Tony Bates, the President of the Skype Division at Microsoft:

Lync Online updates will be delivered quarterly to enable rapid customer adoption, and we will release a new Lync server version in Q2 of 2014.

The “Office Wave 15” products all launched together so it seems reasonable to expect the same from the next wave too.

Supporting that theory is the general shift in Microsoft’s product development strategy to more frequent refreshes and updates. When I read about code name “Blue”, the new Exchange servicing model, and the pace of updates to Microsoft’s Office 365 service it seems entirely possible that they all line up as part of an overall Microsoft strategy.

But why would Microsoft want to shake everything up and go from big releases every 3-4 years to more frequent cumulative updates and a shorter support life cycle? I can think of a few reasons.

Hopefully we’ll see more information soon about the exact dates and location for MEC 2014. Personally I think Microsoft should consider bringing the event down under to Australia. Surely all you northern hemisphere IT pros get tired of travelling to the same old cities for conferences, and would love to go international for a change, right? 🙂