You are here: Home / Clients / OneDrive / Migrate Home Drives to OneDrive for Business

One of the wins for Office 365 customers who have OneDrive for Business included in their licensing is to migrate users’ personal files to OneDrive.

For files that are stored in home drives on traditional file servers, the reduction in server and storage costs is a benefit. For other personal files stored on local computers, moving the files to OneDrive so that they are safely stored in the cloud is also a benefit.

The OneDrive sync client can also synchronize files from SharePoint libraries for offline access to team files. So having it configure and ready to go is useful to end users who travel or work in places with poor connectivity.

In this article I’m going to demonstrate a simple migration scenario for migrating home drives to OneDrive for Business. For the purposes of this demonstration the environment consists of:

Update, June 2018: Known folder moves for OneDrive are now available, starting with Targeted Release customers and rolling out to all customers over the coming months. This capability allows you to move known folders (Documents, Desktop, Pictures, etc)  from users’ computers to OneDrive without using the method demonstrated below.

OneDrive for Business has some limitations for synchronizing files, which includes things like:

Those limitations may change over time, so my list above could be out of date. You should always review the latest information on Microsoft’s support site. There’s a variety of other limits and user experience caveats to be aware of as well.

But for the file limitations, an analysis of the data your planning to migrate would be advisable. This could be as simple as a PowerShell script that recursively scans the file server to look for the issues above. If you qualify for FastTrack support from Microsoft, that service includes analysis and remediation as part of the process (and you can use them for the entire migration, so you don’t need to read this article at all if you don’t want to).

The OneDrive for Business Admin portal allows you to control a variety of settings for OneDrive users, such as whether they are able to share content external to the organization, sync with non-domain joined computers, how files can be used from mobile devices, DLP policies, and more. Before you proceed with your OneDrive migration, it’s worth reviewing the settings to make sure they align with your expectations and security policies.

For example, you might consider it necessary to disable sharing of SharePoint and OneDrive content with external users, or limit syncing of files to domain-joined computers only.

OneDrive has a Group Policy template available from Microsoft. At one time the GPO template could be downloaded from Microsoft, but right now it is only available by navigating to the %localappdata%\Microsoft\OneDrive\BuildNumber\adm\ folder on a computer that has OneDrive installed. An up to date Windows 10 PC should be sufficient. It’s a bit awkward not being able to simply download the latest GPO directly from Microsoft. Perhaps in future they will add it back to the download center.

The OneDrive GPO can be used to set the default location for the OneDrive folder, among other useful settings. That particular setting, in combination with a standard folder redirection policy, is how I’ll be handling the migration in this environment.

When you create a policy and look at the OneDrive settings, nothing is configured by default.

To prevent users from changing the location of their OneDrive, you need to know the tenant ID for your Office 365 tenant. To retrieve your tenant ID, connect to Azure AD with PowerShell and run the Get-AzureADTenantDetail cmdlet. 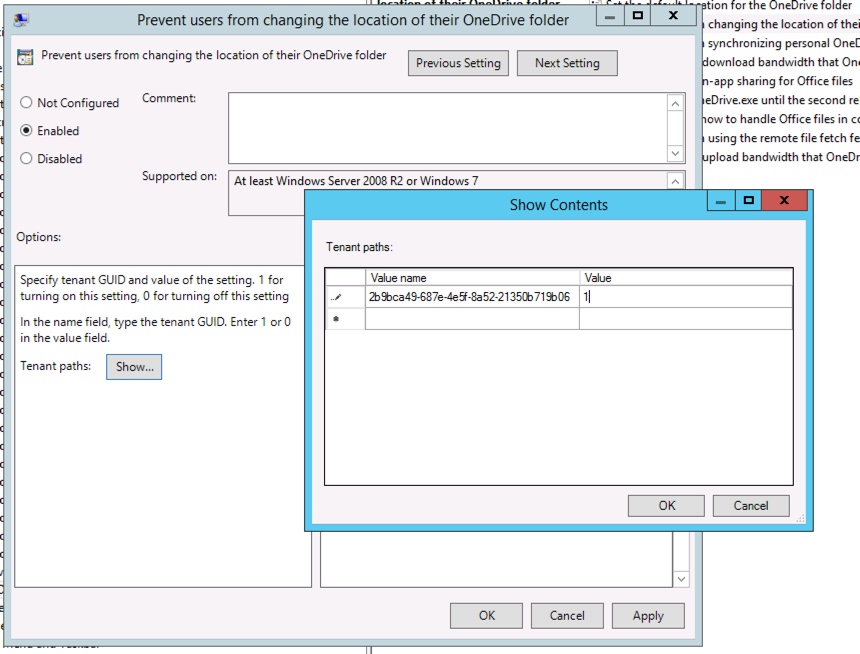 For this environment I’ve placed the OneDrive GPO as a higher priority than the existing folder redirection GPO. I’ve also scoped the OneDrive GPO only to members of the “OneDrive for Business Users” security group, and denied the “Apply” permission for the previous folder redirection GPO for the “OneDrive for Business Users” group. Note that after removing Authenticated Users from the scope of the new policy, you then need to go to the Delegation tab and delegate the “Read” permission for the GPO to Authenticated Users, or you may find it does not process at all. 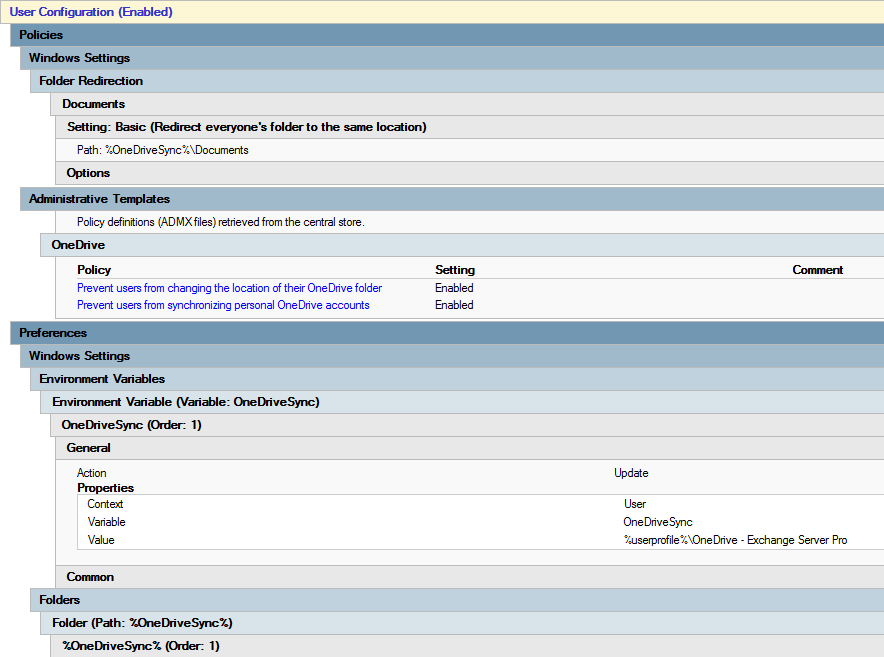 So in effect this all means I can roll out OneDrive to users by adding them to that security group. There is also some end user communication involved in the whole process. You’ll want to make sure your users are expecting the change so there’s no surprises or confusion.

Something to be aware of is that the folder redirection will overwrite any existing data in the destination location that has the same file name and path. If any of your users have already begun using OneDrive and storing files, you should manually deal with those to avoid conflicts. You can find active OneDrive users in the usage reports in the Office 365 admin portal. 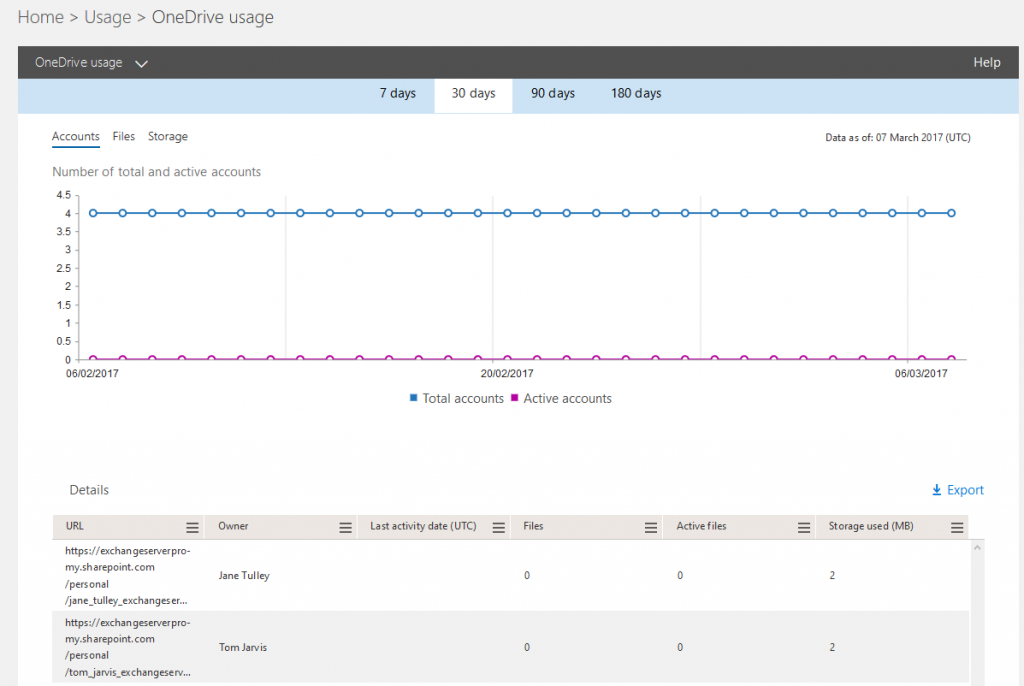 After the GPO has applied, when the user signs in to OneDrive, it will begin syncing that existing data in the local path to the cloud. For environments without any SCCM or other systems in place to initiate a program running in the context of the user, a workaround is to email the user a link to odopen://, which will trigger the OneDrive client to launch. Since you likely want to send them some login instructions and other general adoption advice for OneDrive, you can simply bundle all that up into a single email. 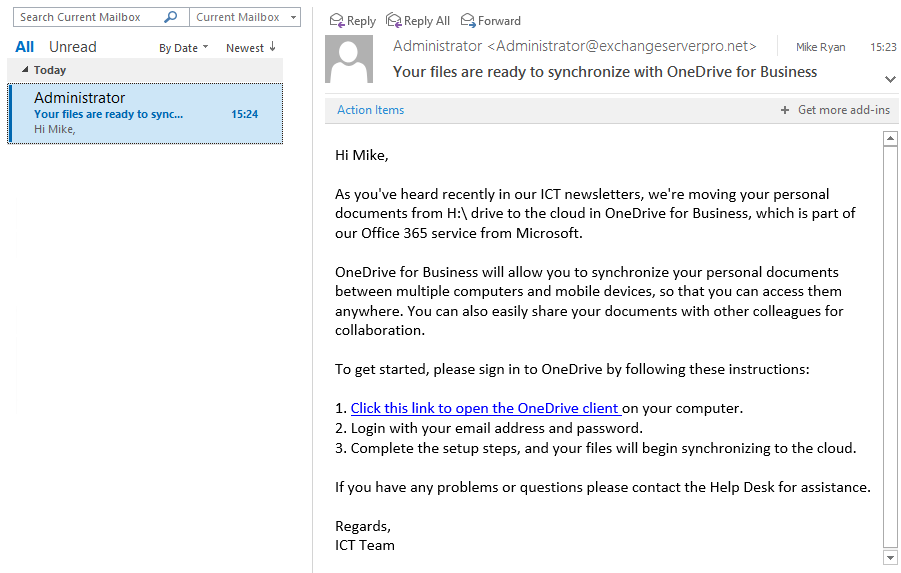 When the user opens OneDrive they’ll be able to walk through the setup process. You should ensure that the instructions you provide are clear about what they should do at each step of the initial configuration wizard. 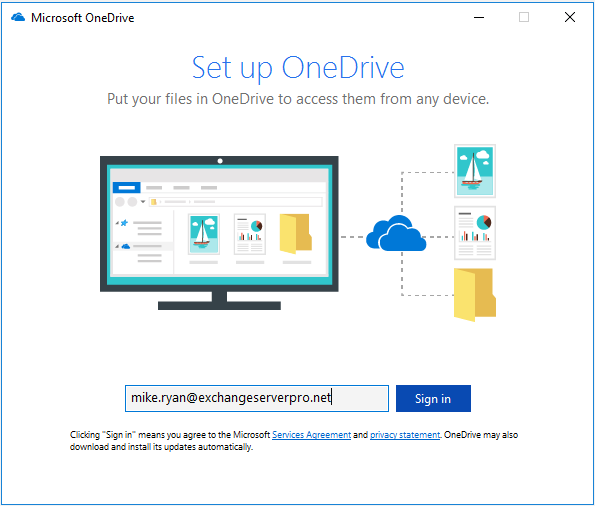 The initial synchronization of files to OneDrive may have a detrimental impact on your network performance. Monitor your network utilization so that you don’t roll out too many users simultaneously.

You can continue to use the OneDrive usage reports in the Office 365 admin portal to track the adoption of OneDrive by your users. 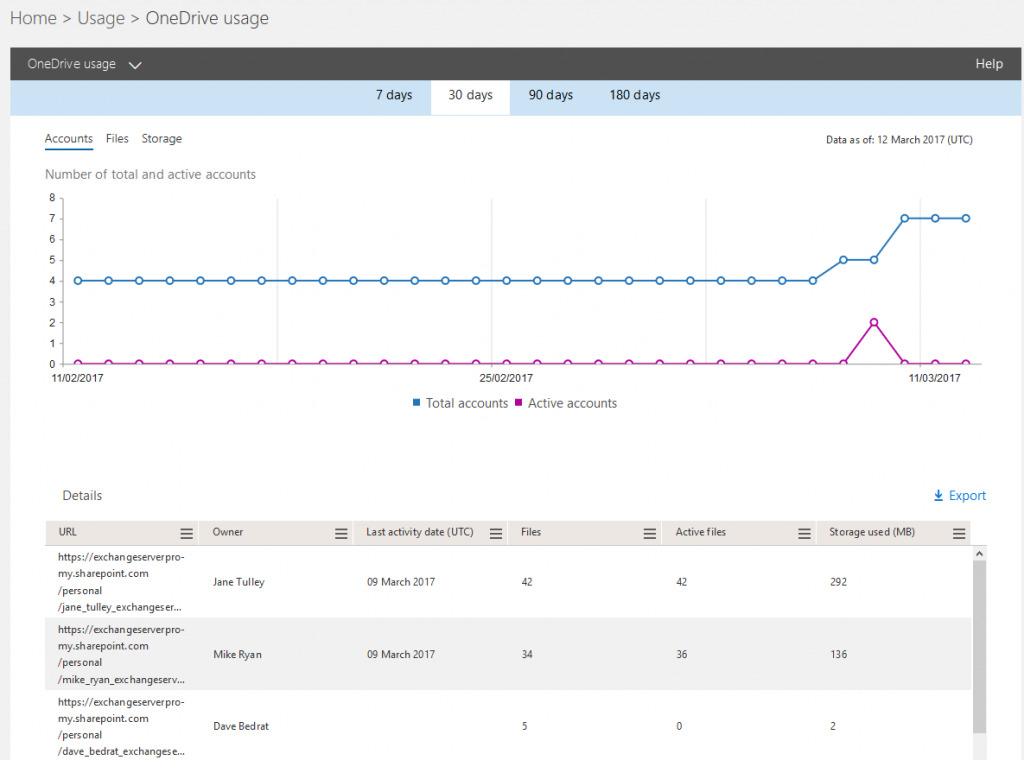 Once you’re satisfied that user home drives have been migrated to OneDrive for Business, you can do a scan of your file server to confirm that the home drives for users are empty, and then start decommissioning those shares so that the storage can be reclaimed. For any users who have not logged on and completed their migration you can manually assist them, or back up their home drive files elsewhere, or even upload the files to their OneDrive in the cloud yourself so that they’re waiting for initial sync to the client.

If you haven’t yet started the migration process, the Email Migration to Office 365 white paper will be essential reading. Download your free copy to learn how to overcome unforeseen obstacles.