Microsoft Teams now has the ability to connect to external cloud storage providers such as Dropbox and Google Drive. This change is rolling out to Office 365 customers now, and is enabled by default.

Microsoft takes a reasonably open approach to third party integration with their apps these days, especially cloud storage apps. The reality of course is that Microsoft’s own file storage solution, OneDrive for Business, has a patchy reputation for reliability and functionality, which means a lot of Office 365 customers ended up using third party services for file storage. Naturally Microsoft would like those customers to make use of Teams and other Office 365 apps, so integration is necessary. OneDrive for Business also has different use cases than other services, for example Dropbox works well for small teams as a file server replacement without a lot of complexity involved in setting it up, whereas OneDrive is a sync client that works with SharePoint-based stores which require more expertise to set up. Simply put, there’s a lot of non-Microsoft cloud storage usage out there, and integration with Teams helps it compete with other team chat apps.

For the end user, the option to add cloud storage is available in the Files tab of a Teams channel.

The user is prompted to authenticate to their cloud storage provider, such as Dropbox. 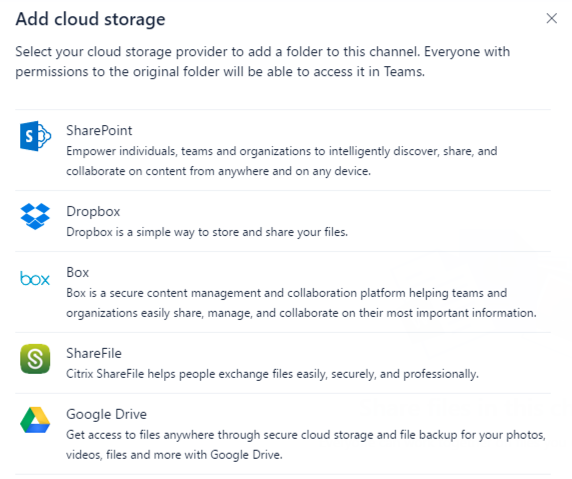 After adding a folder from cloud storage, the files will be accessible in Teams for any user who can authenticate to the same storage server and who has access to those files. For example, if Dave Bedrat adds a Dropbox folder to the IT Operations team, other team members such as Jane Tulley can’t access the files with their own Dropbox credentials if Dave has not shared the folder with them.

After the files have been shared and accepted in Dropbox they will be accessible by Jane in Microsoft Teams. 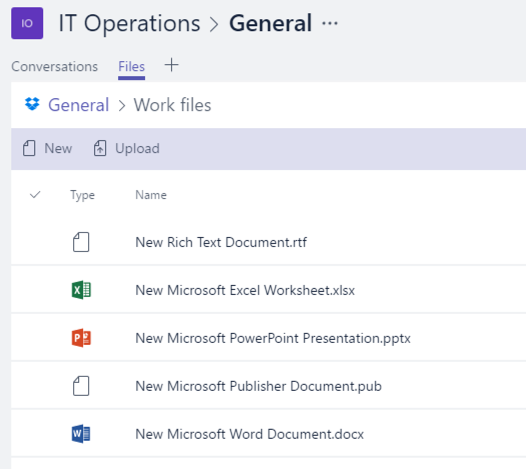 For organizations that do not want to allow access to cloud storage services there are controls available in the Office 365 admin portal. Navigate to Settings, Services & add-ins, and open the Microsoft Teams settings. You can disable some or all of the storage services here. It’s possible that in future other storage services will be added to Teams, so keep an eye on your Message Center notifications so that you can revisit these settings again in future when necessary.

In my testing the change took about 30 minutes before the Teams clients lost access to the options to add third party cloud storage to their channels. The Dropbox folder remained visible in Teams, but could not be opened. The only option available was to delete it. 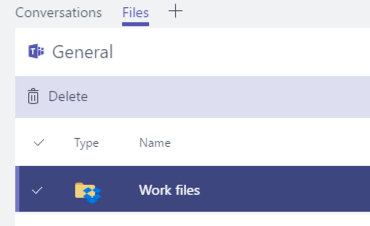 The “Delete” button should probably be renamed to “Remove” since that is what it really does. The folder contents themselves are not deleted, and the dialog that pops up to confirm uses the word “Remove” which is a better description of what is happening. The user is also told they can add it back any time, even if all of the cloud storage options are disabled by an administrator, which is a bit misleading but probably won’t cause many issues.

If you decide to turn off cloud storage for Teams, and there’s a chance that your users are already making use of the feature, then you’ll need to plan how to communicate the change. Teams itself doesn’t surface any reports to indicate who is using what, so there’s no easy way to find out who is already using cloud storage. If your organization is already using Cloud App Security to discover app usage then that might give you some clues. Otherwise, you’ll just need to come up with the best communication plan that suits your organization.