I’m a few days behind on this roundup because we’ve been busy getting the new fourth edition of Office 365 for IT Pros out the door. Here’s what’s new and changed in Office 365 for May.

Microsoft Teams, the Slack-like persistent chat service for Office 365 which became generally available in March, has switched to a default of “On” for the organization-wide setting in the admin portal. Microsoft recommends the use of per-user licensing for Teams, and is planning to remove the org-wide control from the portal in the near future. You can manage licensing for your Office 365 users with groups-based licensing or by using PowerShell.

The Advanced Threat Protection (ATP) roll out for Office 365 ProPlus applications began for customers that are ATP licensed (E5 or standalone licensing). ATP Safe Links policies can now be applied to links in Word, Excel, and PowerPoint documents. When end users click a link in a document it is checked by ATP to see whether the link is a known malicious website and the user is blocked and warned of the threat. My Word docs started exhibiting this behavior back in April with a few initial hiccups, but it seems to have improved now. The Safe Links policies in the Security and Compliance Center (or via the Exchange Admin Center) now have additional settings for organization-wide settings, which includes the option to turn on Safe Links for Office 2016 on Windows. 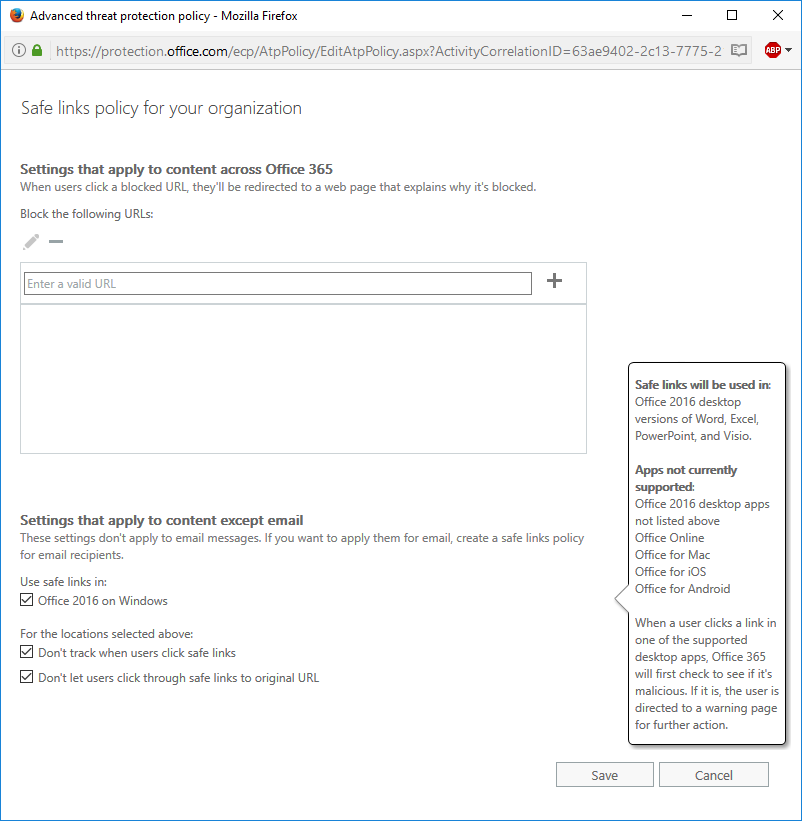 More changes were rolled out for Office 365 Groups. Mail Contacts can now be added as members of Groups, simplifying the process of adding external guests to Groups. Tony Redmond has a write up of how this works, as well as a few quirks to be aware of. One of the caveats, at least for now, is that this doesn’t remove the requirement for distribution groups having no mail contacts in them before they can be converted to Groups. DL conversion to Groups is now available for admins and DL owners, but has a long list of eligibility requirements before a DL can actually be converted (e.g. must be a cloud-only group, that isn’t a security group, with no nesting, no forwarding, not dynamic, and more).

Groups are also getting a digest email for Group members to catch them up on communications they may have missed. The details on this are a bit vague so I’ll be interested to see it in action. From the info available it seems that you must be subscribed to the Group to receive the digest, which to me seems to be needless duplication (I’ll get the Group messages plus a digest of the Group messages?). If it is available as a separate option (e.g. I don’t want every message but I do want the digest) then that would make more sense to me, as would options to control the day/time the digest arrives.

SharePoint (and OneDrive for Business) are getting per-group sharing controls. First release tenants will start to see the new options in June, with other tenants to follow later. Currently we can control external sharing for the entire organization and at the site collection level. The new controls allow you to specify security groups that are allowed to share with external users, so you can lock down the organization-wide settings and then use the per-group settings to create exemptions.

For SharePoint and OneDrive mobile users a quality of life improvement is being implemented to increase the token lifetime from 14 days to 90 days. The longer session timeout is a welcome change for anyone who is getting tired of repeatedly logging in to mobile apps.

To improve the end user experience for OneDrive, which will probably increase adoption as well, Microsoft also announced OneDrive Files On-Demand which is coming for Windows 10 computers that have the “Fall Creators Update”, as well as mobile applications. Files On-Demand allows users who are connected online to see all of the files in their OneDrive, not just the files that have been synced locally. This is somewhat similar to the user experience when placeholders existed in OneDrive, and reduces local storage usage by allowing users to only sync their most important and frequently accessed files locally. When an online file is accessed it will be automatically downloaded to the local computer for access.

Microsoft announced plans for general availability of Microsoft Stream, the replacement for Office 365 Video. When Stream arrives in tenants Microsoft will begin a phased migration of existing Office 365 Video content into Stream. Existing links and embedded content will continue to work, so there is no action required. If you’re planning to begin using Office 365 for video content today, start with Microsoft Stream. Stream is enabled by default and can be managed with per-user licensing.

Exchange Online received an enhancement to mail flow rules that allows you to create rules for Direct to Calendar meetings, which bypass the invitee needing to accept (or reject) the message and instead will add it directly to their calendar. I can think of a few customer cases where all meeting requests originating from a particular user or application were deemed mandatory, or were always sent as tentative/info-only meeting requests, so this capability would be useful for those customers.

Microsoft Planner users have finally got a mobile app to use. The initial version of the app allows you to view and update plans on your mobile device, but not create new plans. That feature, as well as Intune support, are coming in the near future. Since Planner tasks don’t integrate with Outlook tasks, Microsoft now has two separate task management apps for mobile (Planner and To-Do).

The public preview of the Power BI Office 365 adoption content pack has arrived. We’re well past the stage of initial onboarding being the big hurdle for Office 365, and now it’s adoption of features that many organizations are focusing on to get value from their investment in Office 365. The Power BI reports let you see how your organization is using services like Exchange Online, Skype, Yammer, OneDrive, and SharePoint, as well as report on activations of licensed Office applications.

Finally, usage reporting for Office 365 has been added to the Graph API as a preview. The individual usage reports that the Office 365 admin portal presents are useful enough, but many organizations want to pull that data into their own reporting or consolidate it into a single report. Now that the Graph API provides usage reporting data Microsoft has also announced that many of the PowerShell cmdlets currently used for that purpose have been deprecated, and will be retired in October this year. If you depend on those cmdlets for your custom reporting then it’s time you got into the Graph API instead.