With the Exchange 2013 servers deployed in the new Datacenter1 location we can also configure Transport. For the Exchange Server Pro organization there are two elements to this:

Let’s take a look at each of these. 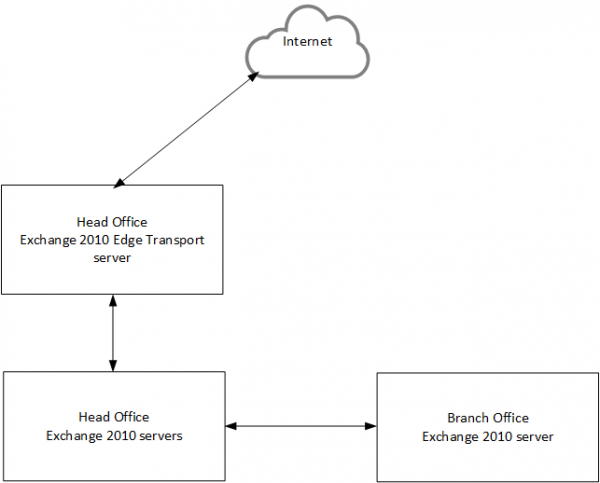 The Exchange 2013 servers in DataCenter1 will send and receive internet email directly, without the use of an Edge Transport server. The routing topology during the co-existence period will look like this.

The outbound mail flow from Datacenter1 is established by creating a send connector.

Note that inbound mail flow does not go to Datacenter1 until the MX records are updated. However, with the send connector in place some production email will possibly flow out via Datacenter1. So with the send connector in place the Exchange 2013 servers can be considered to be in production, however as long as the Head Office servers are functioning there should be two routes for outbound email, so the Exchange 2013 servers are not yet of critical importance.

The existing Head Office Exchange 2010 servers have relay connectors configured for a variety of systems and applications to use as an SMTP service. These are currently load balanced. The load balancer will be moved to Datacenter1 later, so the change to that traffic can be made on the load balancer itself. Otherwise the change would be made in DNS, to point the SMTP alias to the new server(s).

First, the new servers require relay connectors to be created with matching configurations. The default Frontend connector on Exchange 2013 servers permits sending email to internal recipients, so only those that require external relay need to use the relay connectors. However, like many organizations, the Exchange Server Pro organization uses one SMTP alias for both internal and external relay needs.

In the next part of this series we’ll look at some more preparation tasks for the co-existence period, before the cutover of services can begin.