For most organizations the main benefit of deploying an Exchange Server 2010 Client Access Server array is to minimize downtime.

Typically this means installing the updates to CAS array members one at a time, allowing each one to complete the update and (if necessary) reboot before updating the next member.

This tutorial demonstrates how to update a Client Access Server array without causing the entire array to go offline at once.  For this tutorial Update Rollup 4 for Exchange Server 2010 RTM is being installed.

Preparing the NLB Cluster for Updates

The first step is to remove the server that is about to be updated from the Network Load Balancing (NLB) cluster.

There are two ways to take a CAS array member our of the NLB cluster:

The difference between the two is that Stop will immediately stop the server regardless of who is currently connected to it, while Drainstop will put the server in a state where it will not accept new connections but will continue serving existing connections until they disconnect.

For urgent updates a Stop command may be necessary, but for planned maintenance a Drainstop has the least potential impact on active client connections to the CAS array.

To issue a Drainstop launch Network Load Balancing Manager, right-click on the desired server, choose Control Host and then Drainstop. 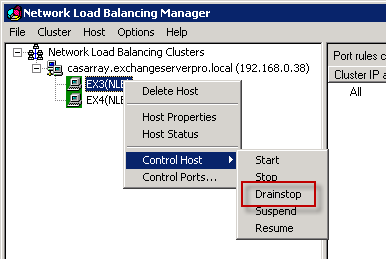 When the server has no more active connections it will be in a stopped state.

Right click the server and choose Properties.  Set the default state of the server to Stopped.  This will prevent it from automatically starting and accepting client connections after any reboots that the updates require, to allow you time to verify the updates were successful first before rejoining the NLB cluster. 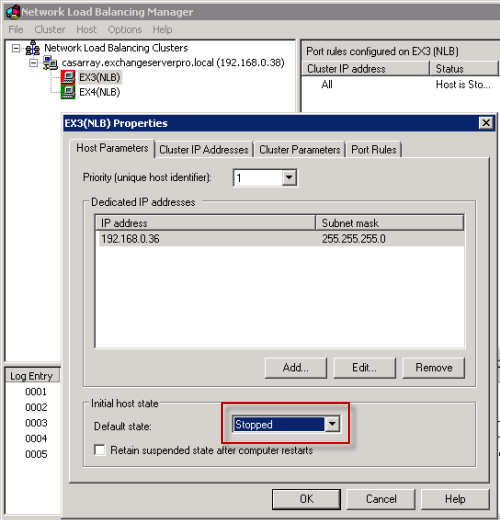 The Client Access Server role is often installed on the same server as the Hub Transport server role, even when deployed as a CAS array.

Hub Transport servers often run additional applications such as antivirus and anti-spam software that hooks into the Exchange Server services.  These can cause conflicts with Exchange Server updates, for example if a third party application tries to automatically restart a service that it depends on that has been stopped by the update process.

Forefront is one example of this, so for servers running Forefront Protection for Exchange those services can be stopped using FSUtility.

If the CAS array members are monitored using SCOM or another system this should also be disabled, or placed into maintenance mode before the update is performed.  This prevents unnecessary alarms in the monitoring system due to stopped services or server restarts, and also prevents the monitoring agent from trying to perform any automatic remediation such as restarting services.

Backing Up the Server

Some organizations will require an ad-hoc backup be run of at least one CAS array member before updates are applied.  Others will be happy to rely on the latest scheduled backup instead.  And some will even be satisfied that multiple CAS array members exist and so if a bad update puts one of them out of action there is no outage to end users, and the server can simply be manually reinstalled.

Install the update following the procedure for that update type.

Update rollups come in the form of a .MSP file (Windows Installer Patch) that is applied to the server.  Simply double-click the file or launch it from a command line window. 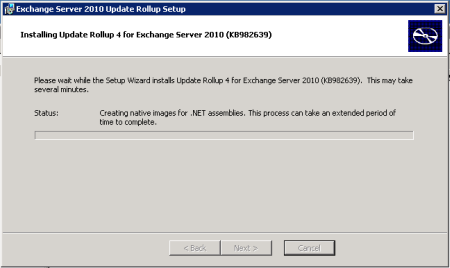 Returning the Server to Production

Start the server in the NLB cluster. 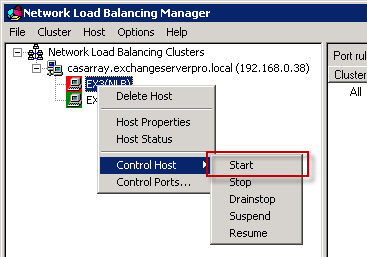 And re-enable monitoring agents and alarms for the server.

After the first CAS array member has been successfully updated you can move on to the next one.