With all co-existence preparations complete we can now cut over the namespaces to Exchange Server 2013.

First, let’s be clear that this is a significant change and should be approached with due care. Although the changes themselves are quite simple (mostly DNS changes), they are best performed during a window of time when they will have the least impact on your end users, with enough time for you to test the outcome and roll back if there is a problem.

On the topic of rolling back, your changes should be well planned and well documented as you go along, so that you can easily reverse them if you need to.

For the Exchange Server Pro organization the external namespaces are:

In a scenario where the external IP addresses are staying the same the cut over would occur on the edge router or firewall that performs NATing for the network. However in this case the internet-facing Exchange 2010 servers are in the Head Office site, while the new internet-facing Exchange 2013 servers are in the Datacenter1 site which has its own internet connection and a new public IP range. 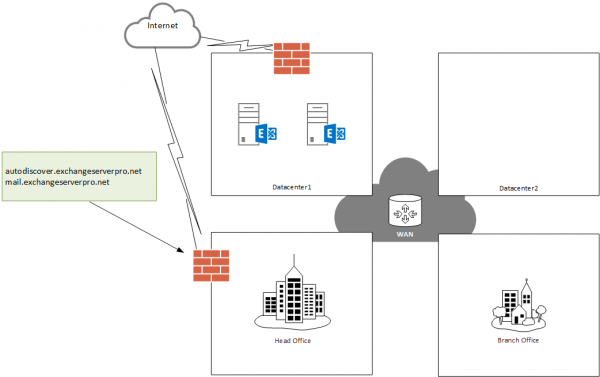 Therefore the change is made in public DNS, updating the records to the new IP addresses. Depending on the TTL (time-to-live) on those DNS records this change may take anywhere from several minutes to several hours to take effect. It is recommended before making planned DNS changes to lower the TTL to a short timespan (eg 5 minutes) at least a day or two in advance of the change so that it will take effect faster, as well as allowing faster roll back.

Note that for the Exchange Server Pro organization this change will impact Client Access services (such as OWA, ActiveSync, Outlook Anywhere), as well as Transport services (ie MX records, mail flow), because the MX record for the domain points to mail.exchangeserverpro.net as well. If the MX record pointed to a different DNS name, or the IP addresses weren’t actually changing, then services on different ports could be cut over at different times.

For more on managing changes to MX records see the following article:

After making the changes to public DNS and/or your firewall NATing repeat the testing and health checks performed earlier to verify that services are working as expected.

The outcome of the external DNS changes is that external access (eg Outlook Anywhere, ActiveSync, OWA, and inbound SMTP) will go via the Exchange 2013 servers and be proxied/routed internally as required.

For the Exchange Server Pro organization the external namespaces are:

High availability for Exchange 2013 Client Access services in Datacenter1 will initially be handled by DNS round robin. So the DNS records for the above namespaces (except SMTP) are updated in the internal DNS zones with two A records, which point to each of the Exchange 2013 IP addresses.

SMTP is a little different. SMTP doesn’t work well with DNS round robin, because many SMTP clients (such as printers) will simply fail a connection if the IP they attempt to connect to doesn’t respond, rather than retry with a different IP as most modern HTTP clients do (including Outlook).

For now the Exchange Server Pro organization is retaining a load balancer for SMTP, so the cut over for SMTP is performed on the load balancer configuration itself. If this cost wasn’t practical or high availability for SMTP wasn’t important then pointing the SMTP namespace at just one Exchange 2013 server IP address would be a reasonable solution.

After making the changes to internal DNS repeat the testing and health checks performed earlier to verify that services are working as expected.

What About Internal Outlook Users?

At this point you may be wondering what are the real impacts to internal Outlook users when you make the internal namespace changes in DNS.

Exchange 2010 mailbox users will continue to connect to the RPCClientAccessServer as before. Their Outlook profiles do not change. However, their connectivity for the namespaces that have been pointed to Exchange 2013 (ie Autodiscover, EWS, etc) will go to the Exchange 2013 CAS where they are then proxied to Exchange 2010 as necessary to fulfil the requests. 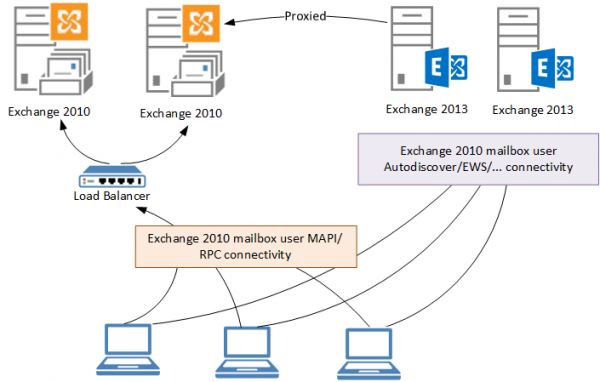 It is only after moving mailboxes to Exchange 2013 that Outlook MAPI/RPC connectivity for those users will switch over to the Outlook Anywhere namespace for Exchange 2013 (mail.exchangeserverpro.net in this example scenario).

In the next part of this series we’ll begin looking at the mailbox migration tasks.