To update the DAG members with new patches, update rollups or service packs, the update process should be managed to prevent all of the DAG members from being offline at the same time.

To do this you can move the active mailbox databases off a particular server so that it can be patched, and if necessary rebooted, without causing any downtime for mailbox users on that database.

The first step is to move active mailbox databases to another DAG member so that the server can be updated.

To see a list of mailbox databases and their current active server use the Get-MailboxDatabase cmdlet.

In this example I want to apply updates to server EX1, and I can see that it currently hosts the active copy of Mailbox Database 02.

All of the mailbox databases are now active on server EX2.

As another example, if there were multiple databases active on a server you can move all of them with a single command.

Note the use of -Confirm:$false to avoid having to confirm each move. Use this option with caution.

After moving all active mailbox databases off the server that you are planning to update, the final preparation step is to block activation on the server to prevent it from automatically reactiving a database copy while you are performing maintenance.

Next, use Set-MailboxServer to block activation.

For Exchange 2010 with Service Pack 1 the process is a little easier thanks to some scripts provided by Microsoft. Open the Exchange Management Shell and navigate to the scripts folder on the Exchange server.

Next run the StartDagServerMaintenance.ps1 PowerShell script.

The script will automatically do the following tasks for you:

If the mailbox server is running any Exchange-integrated services, such as antivirus software, these should be disabled prior to the update.

For example to disable Forefront use the FSUtility command (note that this is done automatically by Exchange Server 2010 update rollups and service packs now).

Another example is Data Protection Manager 2010, which may be configured to perform Copy backups from passive database copies at frequent intervals through the day. Make sure these jobs are paused to prevent errors or conflicts from occuring.

If the DAG members are monitored using SCOM or a similar system then this should also be disabled or placed into maintenance mode.

This will prevent alarms from being raised as well as prevent any automatic remediation actions from being run by the monitoring agent that may cause the server updates to fail.

Install the update following the deployment notes for that update type.

Update rollups come in the form of a .MSP file (Windows Installer Patch) that is applied to the server. Simply double-click the file or launch it from a command line window. 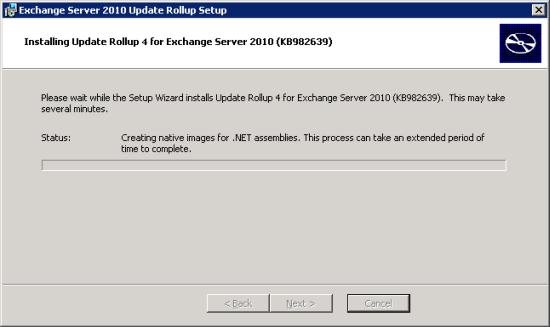 Re-enable monitoring agents and alarms for the server.

Set the server’s activation policy back to its original setting.

At this stage you might move all of the active mailbox databases to the server that was just updated so that you can update the other servers in the DAG. After all of the DAG members have been updated it is likely that mailbox databases will be active on servers that are not their first activation preference.

For Exchange Server 2010 RTM you can view the activation preferences for each database, and manually move active mailbox databases to their preferred server.

Once again Exchange 2010 with Service Pack 1 makes this task easier thanks to a script provided by Microsoft. Open the Exchange Management Shell and navigate to the scripts folder on the Exchange server.

Next run the StopDagServerMaintenance.ps1 PowerShell script.

The script will automatically reverse each of the actions made by StartDagServerMaintenance.ps1 except that it will not move active mailbox databases back to the server.

To move the active mailbox databases you can continue to go to each mailbox server in the DAG and run StartDagServerMaintenance.ps1 and perform your updates. When all of the servers have been updated you can rebalance the DAG automatically using a script from Microsoft which is demonstrated here.