With the recent release of Cumulative Update 9 for Exchange Server 2013, as well as updates to Exchange Online (Office 365), Microsoft has made it possible to control the sent items behaviour for shared mailboxes when delegates send mail as the mailbox, or on behalf of the mailbox.

This functionality has been available for quite some time in Exchange Server 2010 (click here for more details) but has been implemented differently in Exchange 2013 and Exchange Online. You will also notice as you read the examples below that managing the settings in a co-existence environment doesn’t follow the normal rules of only using the matching version of management tools to manage a mailbox (eg Exchange 2010 tools to manage an Exchange 2010 mailbox).

Let’s take a look at a how this functionality can be managed in an environment that has all of the following Exchange versions co-existing:

In this example scenario we’ll be looking at three shared mailboxes and three users, each hosted on different versions of Exchange or online. 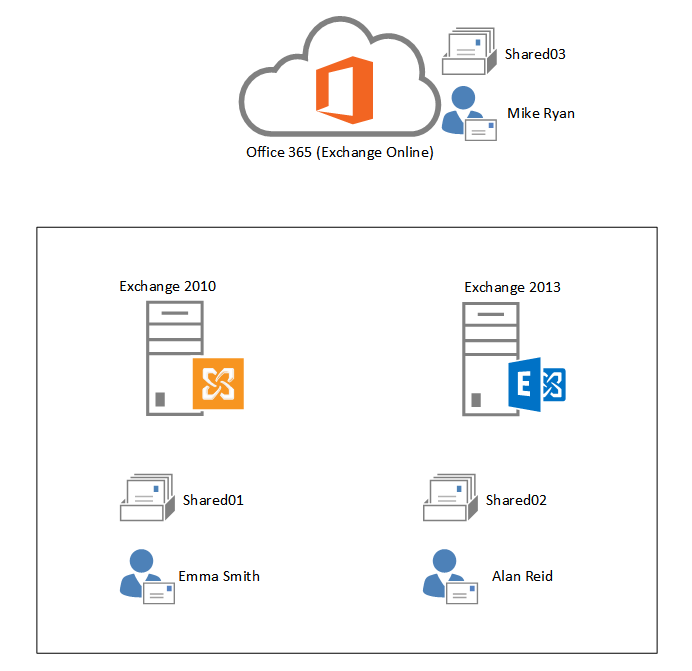 To begin with there is no change to how the sent items configuration is applied to the shared mailbox Shared01, hosted on an Exchange 2010 server. The steps are detailed here, but I’ll repeat them in this tutorial as well for clarity, and because in a co-existence scenario with Exchange 2013 there is an additional step when the email sender’s mailbox is hosted on Exchange 2013.

First, confirming that Shared01 is hosted on the Exchange 2010 server.

Next, granting Emma Smith full access to the mailbox, as well as Send-As rights.

Emma is able to open Outlook 2013 and the Shared01 mailbox is auto-mapped to her profile. 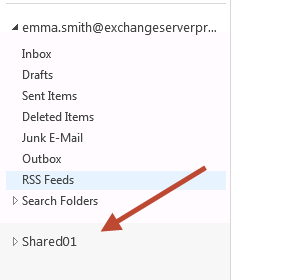 The Shared01 mailbox has the default sent items behaviour, which will store the sent item in Emma’s mailbox when she sends as Shared01.

Modifying this to SenderAndFrom will store a copy of sent items in both Emma’s and Shared01’s sent items when she sends as Shared01.

Note: I’ve configured the same behaviour for Send on Behalf as well.

Open an Exchange 2013 management shell and use the following command to configure the sent items behaviour:

The message in the email is a little unhelpful.

The attached message was sent by a member of this shared mailbox. Usually, it would appear in Sent Items, but your service is currently being upgraded. Things will be back to normal after the upgrade.

It makes sense if it is true – that an upgrade project is underway and the mailbox is going to be migrated to Exchange 2013 soon. But if you’re in a long term co-existence state this message text will probably start to annoy and confuse end users.

Office 365 is a little simpler, in that it behaves like Exchange 2013 by using the Set-Mailbox cmdlet to configure the sent items behaviour. Connect to Exchange Online with PowerShell to perform the configuration.

Since the recommendation with Hybrid environments is to locate both the user mailboxes and shared mailboxes together (eg, an entire team and their shared mailbox would be hosted on Exchange on-premises, or Exchange Online, but not spread across both) we don’t need to be concerned with the cross-version behaviours shown earlier.

What About Migration Scenarios?

In any co-existence scenario you have to consider what will happen to the sent items behaviour settings if the mailbox is moved.